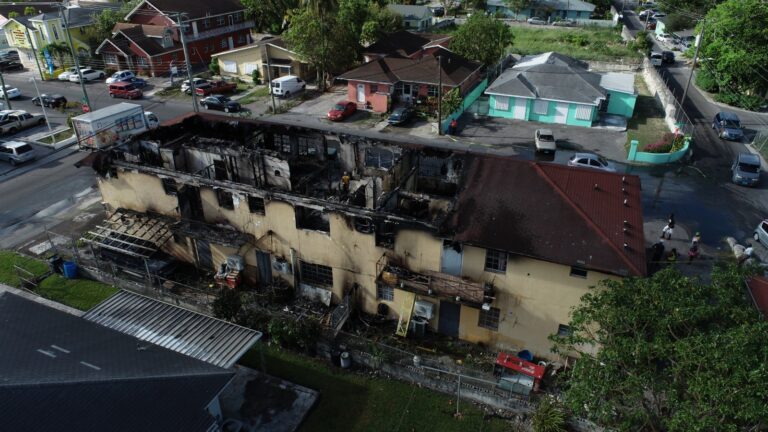 Scenes from a structural fire on Fritz Lane and Seventh Terrace, Centreville, on Tuesday, May 4, 2021, where a body was found burnt beyond recognition.

Three families, four businesses and a church impacted by most recent blaze

NASSAU, BAHAMAS — A burnt and unrecognizable body was found in the ashes of a fire on Seventh Terrance and Fritz Lane yesterday morning, police said.

According to reports, fire services responded to reports of a blaze around 3am and arrived to find the top portion of a seven-unit, two-story structure engulfed in flames.

ASP Audley Peters told reporters on the scene that firefighters were able to extinguish the fire around 6am, however, after conducting a search of the building, they discovered the charred remains of an unidentified person in a bathroom door.

Peter said initial evidence suggests the body found was the only person residing in that portion of the building, but an autopsy will have to be performed.

He advised that four businesses at the bottom of the structure and a church at the top were impacted.

Additionally, three families have also been impacted by the blaze.

“I want to encourage individuals to put smoke alarms or smoke detectors in their buildings to assist in mitigating fires of this nature,” Peters said in a message to residents.

“We also want to encourage individuals not to light candles before going to bed, or to leave their electronic appliances in a position where the electric shortages may not occur.

“This is a sad situation at the moment and a second incident of this nature within the last few days and so we ask members of the public to continue to take their precautionary measures to mitigate these fires from occurring.”

Police could not say at the time what caused the fire.

Peters insisted that with recent occurrences of fires, it is prudent that members of the public take precautionary measures.

“We were fortunate in the prior one that we didn’t have a life lost,” he continued.

“However, citizens and residents must take precaution because we are coming into the fire season and the temperatures are rising, so we have to take the necessary precautions to mitigate fires.

“We know in our archipelago, the wind and all of the other elements can cause a fire to raise swiftly within communities.”