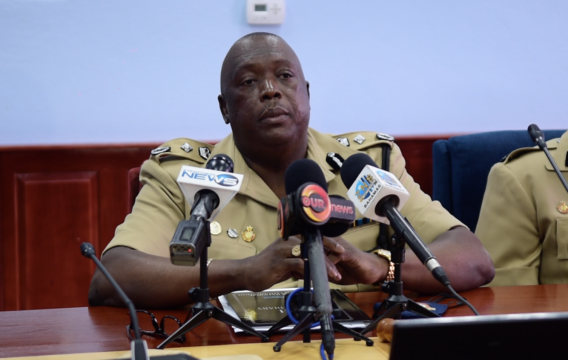 NASSAU, BAHAMAS — Commissioner of Police Paul Rolle yesterday condemned serious allegations of sexual assault against him, and advised that the matter has been turned over to the Criminal Investigation Department (CID).

A video, which has now been widely circulated on social media, shows a local preacher, Apostle Julian Johnson, warning Rolle that he “shall be brought to open shame”.

Speaking to reporters following the dedication of the St Michael’s Chapel at the Police Headquarters on East Street yesterday, Rolle said he was “offended” by the allegations.

“Blessed are those who are reviled for righteousness’ sake when men tell all manner of lies against you,” he said, quoting a Bible verse.

“I am blessed. I have turned the matter over to CID and I believe CID will do what they have to do. I don’t indulge in nonsense.”

Asked whether he was denying the allegations, Rolle reiterated: “I don’t indulge in nonsense. CID is investigating it.

“I have nothing to deny. If he (Johnson) made an allegation, then he should bring his facts and in the absence of that, I think we have to be respectful.

“I don’t want to go any further with that because I am offended by the comments and I’ve made the complaint and I expect that CID will do what they have to do.”

In a statement of the matter on Tuesday, the Royal Bahamas Police Force said the commissioner was aware of a video circulating on social media “making spurious allegations against him”.

“He takes these attacks on his reputation seriously and has reported the matter to the Criminal Investigation Department for an investigation,” it read.

“He stresses that although persons have a right to free speech in this country, they do not have an exclusive right to make malicious and defamatory statements about anyone, so as to cause hurt or unnecessary pain.

“The commissioner is proud of his accomplishments and gives thanks to God as he celebrates his first year as commissioner of police today.”

It added: “The commissioner thanks all good and upstanding citizens and residents for their continued support, as he acknowledges that in the midst of good, evil is always present.

“It was a very difficult year policing this country and despite the personal attacks, he remains focused on his mandate to keep all safe and asks that you continue to keep him. along with his family. in prayer.”