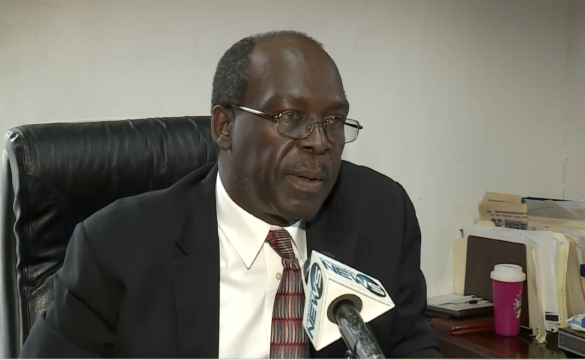 NASSAU, BAHAMAS – As negotiations between the Inagua-based Morton Salt Company and the union representing workers remain at an impasse, president of the Trade Union Congress (TUC), Obie Ferguson, on Wednesday referred to the ongoing situation as one that was very ‘sad’.

“Morton Salt is regressive. The management there seems to be committed to taking the Bahamian workers back to prior 1958. And interestingly enough, the first organized union in The Bahamas started at Morton Salt…so how could you,” Ferguson asked of Morton Salt’s managers.

Despite having a strike certificate in its possession since last year December, The Bahamas Industrial Manufacturers & Allied Workers Union (BIMAWU) has held off on striking with the hope that the company would at least meet them halfway by offering a wage increase that would satisfy the union.

According to the union, these percentages are the same figures that the company presented to the union, with the exception of adding a new ‘leg’ in 2021 of 1.9 per cent.

Yesterday, Ferguson asked, “How could you give a worker a 1.5 per cent increase in pay and then you say to the worker, if you don’t want it, do the next best thing? That is provoking.

“Then [during] the second year of negotiations, [they are offered] 1.5 percent, then the third year 1.7 percent.

“I mean, who do these people think the Bahamian workers are?

“I mean, we had a cold winter in the United States and the salt that they use sometimes for the road [to melt the snow], they would have made millions and millions of dollars,” the TUC president claimed.

The TUC president said while Morton Salt is paying wages, the wage is not enough for a person to live comfortably.