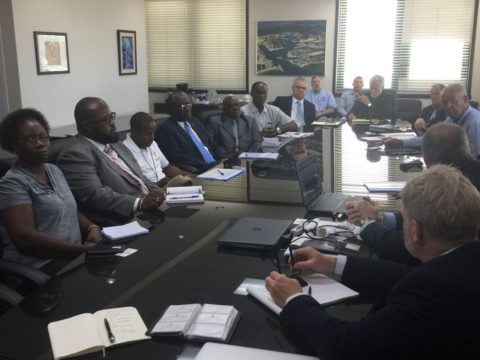 Meeting of Oban Energies, BEST Commission and Local Government Authorities at the Office of the Prime Minister, Grand Bahama, February 22, 2018. (PHOTO: OFFICE OF THE PRIME MINISTER)

Oban engineers and environmental teams, met with the Bahamas Environment Science & Technology (BEST) Commission and local government committee members for East Grand Bahama at the Office of the Prime Minister.

Kreiger’s blemished past includes a first degree fraud felony levied by the United States Securities and Exchange Commission (SEC), to which he pled guilty and was subsequently imposed sanctions. He ultimately settled out of court.

The project drew mounting concern when the Heads of Agreement was signed on Monday without a completed EIA study in hand. The government officials reassured the public that the signing was a means to remove stumbling blocks to improve the ease of doing business in the country.

According to Kreiger, once begun, the environmental study will be completed within 45 days.