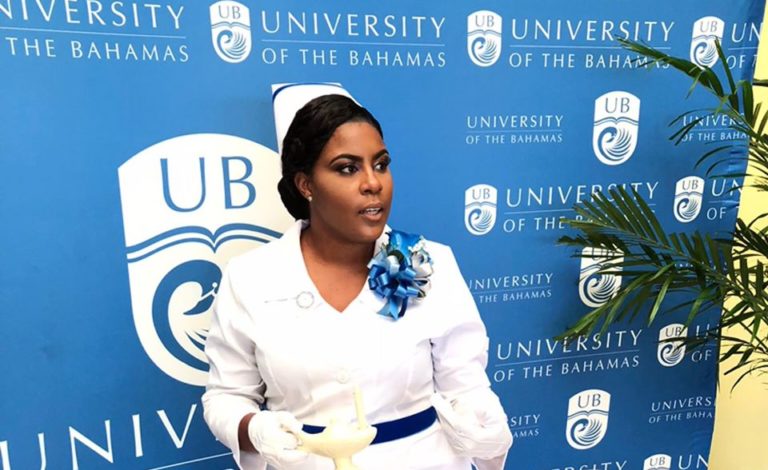 “I spin around like three times. Just feeling the sun was a whole different type of experience,” she told Eyewitness News in a recent interview.

“It’s nothing like feeling fresh air and sunlight. It was almost like my first time being outside.”

Gardiner, a registered nurse, was among over 200 healthcare workers placed in quarantine in April after being exposed to a patient on the Medical Surgical Ward of PMH, who tested positive for the virus.

Health officials said on April 5, a patient was transferred from the Sandilands Rehabilitation’s Robert Smith Unit to PMH for further medical treatment.

That patient received treatment until being discharged on April 15 back to SRC.

A few days later, on April 18, the Medical Surgical Ward II of PMH was declared compromised and closed to new admissions.

The initial Robert Smith Unit patient was returned to PMH and confirmed positive for COVID-19 on April 20.

Gardiner told Eyewitness News that she worked with the patient for four days consistently while he was on the ward.

She noted that at the time they were not aware of the patient’s COVID-19 status.

She said they were advised days later that there was an outbreak and they needed to self-quarantine.

A week into her quarantine, Gardiner said she began experiencing shortness of breath and tachycardia, on exertion only.

She recalled the first time she knew something was wrong with her body.

“I only got up out of the bed (in my room) and took seven steps towards the closet, and when I leaned forward…I realized I couldn’t lean forward for more than seven seconds without experiencing shortness of breath.”

She said whenever she tried to lean forward, she would immediately begin feeling heart palpitations and she would feel as if she was suffocating.

“I had weird symptoms but at the same time it wasn’t as severe as cases across the world…I would say I fight it, even though I have a comorbidity, I have asthma, I guess my body fought against it really hard.”

Gardiner noted that despite the myriad of symptoms the virus presents itself with she never experienced a fever or headaches.

She warned Bahamians to take note of the signs from their bodies because the virus may not come with the Hallmark symptoms.

Gardiner said she experienced symptoms for five days before going to the hospital to be tested.

After three days, her first COVID-19 came back as a false negative, despite the fact that she was still symptomatic and had to be retested.

Upon confirmation of a positive diagnosis, she was admitted into Doctor’s Hospital Blake Road on May 1.

“It was, I would say, an emotional rollercoaster with dealing with the whole concept of finding out that you have COVID-19, that you were exposed at work,” the young nurse said.

“It was just emotional for me. I just want to thank God first, above all. I had nurses and doctors who were really encouraging and really just there for me. I can’t thank the whole medical staff enough for just them being there.”

She thanked the physicians who cared for her including Dr C Bonimy, Dr F Smith, Dr Conliffe, Dr Carey and Dr Lightbourne.

She also thanked nurses Charlene, Gladys, Teandra, Marlene, Altaneka, Chevelle, Oneisha, all of the PCTs, especially Elizabeth and all of the housekeeping staff, especially Renae; as well as PMH nurses including Sister Whymms, Janis Sands and Esther Pierre and the Bahamas Nurses Union.

Gardiner also expressed gratitude for her family of “prayer warriors” who she said continued to guide and cover her during her battle with the illness.

She noted that she would spend most of her days talking to her family members to help pass the time.

Gardiner, who has been a registered nurse for over two years, said she is anxious to return to the frontline.

“I was a little terrified,” she said. “…But at the same time, I’m a nurse and I don’t like to be home but it’s part of my recovery time and I need to stay home. I am anxious, but I guess with more counseling and prayers I should be able to return back to some type of normalcy.”

She said she intends to implement even more strict and careful precautions and practices when she returns to work.

She urged Bahamians not to get too comfortable because “It could happen to anybody”.

“You need to adhere to social distancing, wash your hand consistently, wear a mask, stay home if you don’t need to be someplace, because you are putting your friends and family members at risk,” she said.

“Not because we are not having a surge with the COVID-19 patients and an increase every day doesn’t mean the virus is still not here.”

Following mass testing among health care workers exposed to the virus as a result of the outbreak, there were eight confirmed cases in the ward.

Among those who had to be quarantined were 96 physicians, 62 nurses, 12 rehabilitation and respiratory technicians, nine radiologists, eight laboratory workers, four emergency medical technicians, one facility management worker; and one porter.

To YAHWEH be Glory Honor and Praise for being there for you. ???

Great news !! It gives hope to others that the illness is recoverable. Wishing Gods protection for you! Thank you for your service of love !!!

Thank God for your recovery. Thanks to all of those on the front line that cared for you. Thank you for sharing your story.

The Lord has you here for a reason, you’re one of my heroes. Keep pressing on and stay praying.

To GOD be the glory .for a safe recovery love .