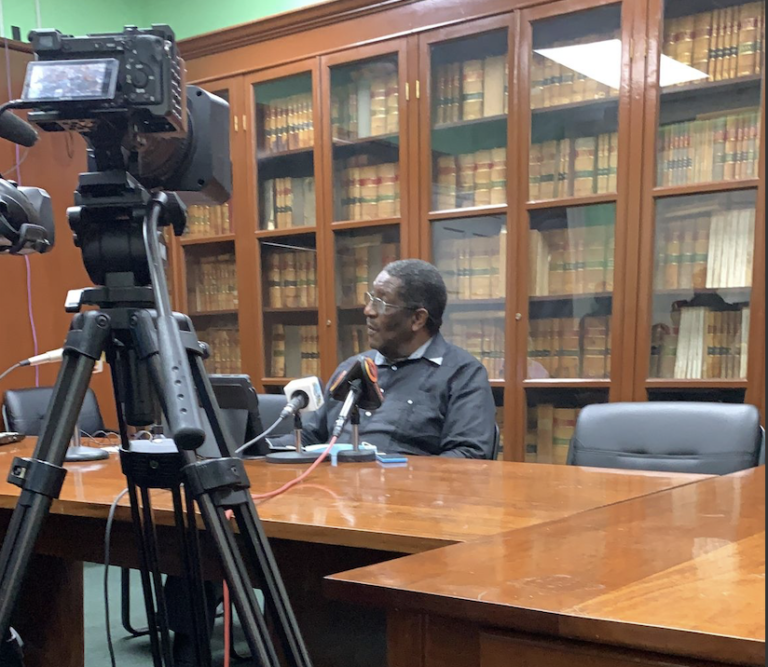 House Speaker Halson Moultrie speaks to reporters in the Majority Room of the House of Assembly on Tuesday, August 3, 2021.

“It’s not in the rules, but all Parliaments really should be open”

NASSAU, BAHAMAS — House Speaker Halson Moultrie announced yesterday that he will hold an “open Parliament” every Wednesday until members return as expected on September 22 or until Parliament is dissolved.

During a press conference in the Majority Room of the House of Assembly, Moultrie outlined several concerns with the executive branch of government and their handling of the COVID-19 pandemic, vaccinations, the separation of powers and other issues.

He accused the prime minister and the Cabinet of “unconstitutionally” shutting down the Parliament for an “unprecedented period” of more than 90 days — from June 21 to September 22.

He insisted that the prolonged recess “deprives duly elected members their privilege of effective representation and the Parliament the constitutional obligation to supervise and have oversight of Cabinet’s interim activities, expenditures and policies”.

“In the circumstances, as the first commoner of the land, on behalf of all commoners’ rights to have your voice in the precincts of Parliament, until the dissolution of Parliament or the 22nd of September, whichever comes first, as speaker, I am compelled to announce the establishment of an open Parliament that will be held every Wednesday from 10am to 1pm,” Moultrie said.

“We cannot accept that the executive should unilaterally shut down one of the third arms of government. That is not in the best interest of good governance or in recognition of the separation of powers.”

The house speaker has previously indicated that believes Prime Minister Dr Hubert Minnis will move to dissolve Parliament and call a snap election.

Yesterday, he reiterated those beliefs.

“Effectively, Parliament has been prorogued. I say that because this is an unprecedented period since I became speaker that Parliament has been shut down — 90 days and in a pandemic and with a snap election being called within that period,” he said.

“[That] is most undemocratic.”

Moultrie insisted that the open Parliament is “no ordinary initiative”.

“This is an initiative to save our nation and to protect the future of generation next from the ravages of corruption and plunder that has gripped our country for the past 54 years,” he said.

Moultrie said while the foyer of the Parliament may be restricted due to COVID-19 regulations, as speaker he “has the authority to give access to Parliament Square”.

Asked where the protocol for an “open Parliament” is included in the House Rules, Moultrie indicated: “It’s not in the rules now but all Parliaments really should be open.”

Asked what he hoped to accomplish by holding the sessions, Moultrie said “the deepening of democracy“.

Why does the Speaker have to take my concerns to the public? I can do that myself!