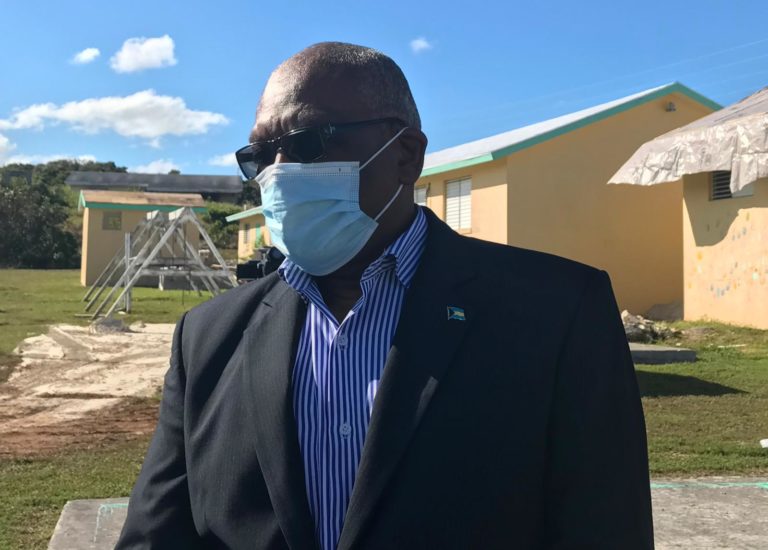 NASSAU, BAHAMAS — Prime Minister Dr Hubert Minnis today said it is not his dream to drill for oil in the territorial waters of The Bahamas, insisting he remained “totally against” the spud of an exploratory well set to begin next week.

Minnis suggested he would have backed out of the deal with Bahamas Petroleum Company (BPC) “if we could have gotten out of it”.

He was asked to respond to mounting concerns over the environmental impact of oil drilling on the sidelines of a Crown Land grant ceremony on Abaco.

“I am totally against oil drilling in our waters,” Minnis said.

“Totally. I have said that before, that has not changed. Unfortunately, we were saddled with an agreement that we met there and when we discussed it with the legal department we were advised that the commitment and everything was signed basically and we could not get out of it.”

He continued: “But if we could have gotten out of it, believe me I am against, totally, drilling for oil in our waters.”

The vessel is expected to reach Grand Bahama in a matter of days.

BPC was initially awarded five licenses by the Christie administration more than a decade ago in 2006.

Opposition Leader Philip Davis recently argued that the deal was reworked between 2007 and 2012 under the Free National Movement (FNM) administration.

Environmental groups Waterkeeper Bahamas Limited and Coalition to Protect Clifton Bay have filed an application to bring judicial review proceedings against the decision to approve exploratory oil drilling in the Supreme Court on Tuesday.

The application asks the court to examine the decisions by the government in granting environmental approvals and license renewals to BPC over the past several months, claiming evidence suggests those decisions were procedurally unfair, unlawful and an abuse of power by the government.

Our Islands, Our Future, a grassroots coalition opposing BPC, has attracted dozens of local businesses, high-profile individuals and NGOs, including Waterkeeper Bahamas and the other plaintiff in the case, Save The Bays. International supporters include non-profits Oceana, Surfrider Foundation, Waterkeeper Alliance, Earthjustice, the Rainforest Action Network, Friends of the Earth and Mission Blue.

The coalition’s online petition calling for a permanent ban on oil drilling in The Bahamas has more than 55,000 signatures to date.

BPC Chief Executive Officer Simon Potter said the company will “vigorously oppose” the application that he called “entirely without legal basis or merit”.

Attorney General Carl Bethel, when asked about the judicial review application today, told Eyewitness News: “The OAG (Office of the Attorney General) has an obligation to defend the government.”

Speaking to reporters today, Minnis did not speak to the legal matter.

However, he said he envisioned another outcome that would see the formation of a joint plan to establish protected marine areas supported by the United Nations (UN).

“I feel somewhat different,” he said, “that if we could have devised a plan led by the UN so that every nation is involved, so that we can protect the waters not only of The Bahamas but Florida, the Caribbean, etc, we can protect our marine resources and you could declare those waters some marine-protected areas.

“Once it’s under the auspices of the UN, it also means you must set up a center to monitor it, and if it was generated from The Bahamas, it would be hoped the home base would be set up in The Bahamas. And it would benefit not only The Bahamas but the entire region because now you have marine officers, you would also have patrol officers, you must have personnel within such facility and you’re protecting the waters.”

Minnis continued: “And at the same time, because you have movements by marine officers etc, that in itself helps with poaching but that has to be generated and monitored and pushed by the UN, because then you’d have involvement of Cuba, the other Caribbean nations, all who are a part of the UN.”

He added: “But also means if the home base is in The Bahamas then it means that the workers must also be a part of the entire UN conglomerate; it means that individuals from different parts of the world can work there also. That’s my dream, not to drill in our waters.”