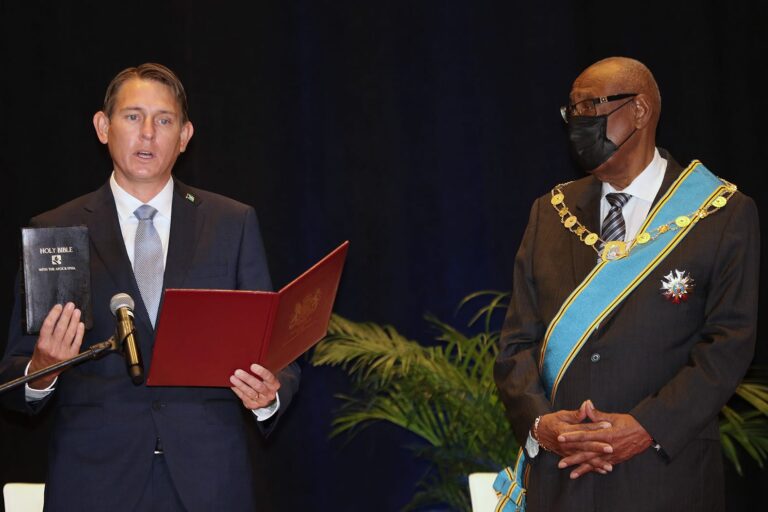 Pinder dismisses rumors as political “pot-stirring”; says he started process to renounce US citizenship as soon as PLP ratified him

NASSAU, BAHAMAS — Central and South Abaco MP John Pinder yesterday confirmed that he has renounced his United States nationality, giving up his dual citizenship, and insisted that loyalty lies with The Bahamas.

Pinder tabled the certificate of loss of nationality of The United States in Parliament, which was approved on July 29, 2021, and sought to address the rumors surrounding the issue.

“This was the same pot that was stirred during my campaign and it was empty then as it is empty now,” he said.

“I will tell you this — I have never thought myself of anything more than a Bahamian.”

He said immediately after receiving the Progressive Liberal Party’s (PLP) ratification for the position, he started and has since completed that process.

“This is serious business we do here in the House of Assembly, the business of the people,” he continued.

“I am only in here to speak for my fellow Abaconians and help in any way that I can for the betterment of The Bahamas.

“My duty is sound; my loyalty is clear.

“After Dorian, I lived in a tent and continued to help my people survive and rebuild while building my house with my two hands.

“I know firsthand the needs of my fellow Abaconians and never has my purpose been more defined as to bring Central and South Abaco back better than before.”

I am a Bahamian through and through.

The Constitution states in Article 48 that no person shall be qualified to be elected as a member of the House of Assembly who is a citizen of another country, having become such a citizen voluntarily, or is, by virtue of his own act, under any acknowledgment of allegiance, obedience or adherence to a foreign power or state.

Speaking to Eyewitness News outside Parliament on why he ultimately made the decision, Pinder said: “It was not a question for me to do so, and my loyalty and my first and utmost duty is to my Abaconians and The Bahamas on the whole.

“I laid it on the table today because it was an issue that was brought up during the campaign and just as I said today, it is stirring an empty pot.

“I am a Bahamian through and through.”

Attorney General Ryan Pinder was also once embroiled in his own dual citizenship challenges in 2010 when he won the Elizabeth by-election.

At the time, the Free National Movement (FNM) opposition charged that Pinder did not renounce his US citizenship before he won the seat.