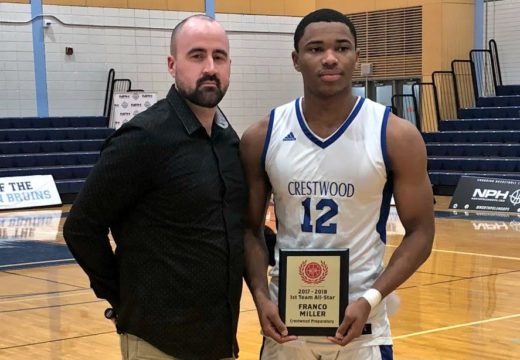 Franco Miller (right) was one of 24 players selected to compete in the 2018 Iverson Classic.

Franco Miller Jr., who turned heads all season long in his first year with Crestwood Preparatory Academy in Ontario, Canada, will now have the chance to go toe-to-toe against some of the best grassroots basketball players in the United States.

Miller was one of 24 players selected to compete in the 2018 Allen Iverson Roundball Classic, popularly referred to as the Iverson Classic.

game in the country.

Miller, who averaged 21.8 points, 3.6 assists and four rebounds, will suit up for Team Honor.

“These young guys are the future,” Iverson said. “I’m proud to have every single one of them here.”

The 2018 Iverson Classic weekend will tip off on Thursday, April 19, with a day of events, including a Dunk Contest, 3-Point Shootout and more. A location, schedule, venue, broadcast and ticket information will be announced later this week.

Miller garnered interest from several National Collegiate Athletic Association (NCAA) Division I schools over the course of his season in Canada. Schools that have made official offers for the 6’4” wingman include, Towson University (TU), Montana State University (MSU), the University of Wyoming (UW) and the University of Illinois at Chicago (UI).

Miller earned the majority of his offers from his performance in the National Preparatory Association’s (NPA) prep league over the Christmas holidays. There, he recorded two 30-point games and led the Lions to a perfect 4-0 win/loss record over the course of a three-day tournament.