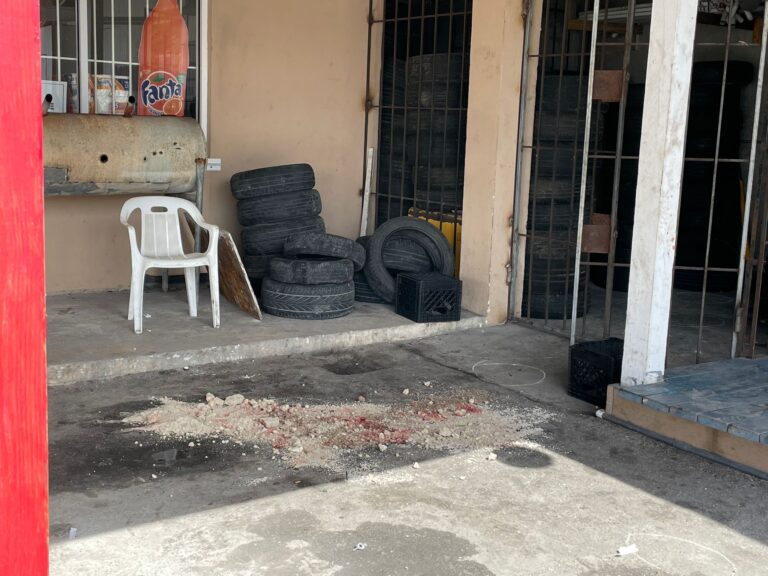 The scene of a murder on Faith Avenue South opposite Anatol Rodgers High School on Sunday, September 26, 2021.

“It’s everyone’s responsibility as we tackle this issue of violent crime, particularly with the use of firearms”

NASSAU, BAHAMAS — The employee of a car cleaning business on Faith Avenue South was shot dead yesterday, according to police.

Officers responding to reports of gunshots shortly after 2pm found the man lying on the ground with a gunshot wound to the head.

According to reports, a gunman exited a car and shot the victim, whose identity was unknown.

It was unclear if the suspect was the lone gunman.

The motivation for the shooting also remains unclear.

On the scene, Assistant Superintendent Audley Peters appealed for anyone with information to contact the police.

Asked if closed-circuit television (CCTV) footage from businesses in the area was assisting police, Peters said police were actively canvassing the area and “in due course, we will know what we have to work with to bring this matter to some closure”.

A tire shop and small restaurant were adjacent to the blood-stained ground where the victim succumbed to his injuries.

In the background, a metal grill appeared to have several small holes in it.

Peters was asked if the holes were determined to be gunshots fired during the fatal shooting.

“We cannot say that is the case,” he said.

“That might have been a previous incident, but all our evidence will direct us as to what actually occurred here.”

Peters reminded the public “everyone is responsible for this issue of crime in our communities”.

He said every woman and man that is aware of someone carrying an illegal firearm must reflect and understand that that weapon could be used to take the life or lives of their loved ones or someone they know.

“We ask you to have the courage, the fortitude and I’d even go as far as to say be brave in coming forward to the police and giving us that information,” Peters said.

“Today, somebody is affected by this death — families, children, a husband, a wife, relatives; they have been affected.

“The community has been affected.

“The resources that [are] going to have to be used to bring this matter to some closure, so it’s everyone’s responsibility as we tackle this issue of violent crime, particularly with the use of firearms.”