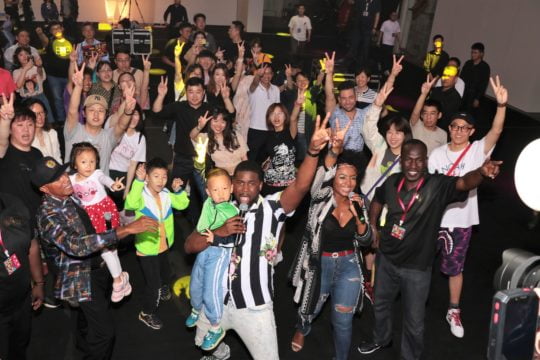 Vocalists Freddie Munnings, Jr., and Angel Reckley joined Julien “Believe” for the set with Brick City Band members Inspectors Julian Darville and Jackson Jeffer, and Corporals Treco Johnson and Chineko Andrews.  The team of visiting musicians were conducting a number of live performances in Beijing, through May 27, 2019.

Among those present included the Bahamas Ambassador to the People’s Republic of China His Excellency Sterling R.L. Quant, and Bahamian supporters and fans.

Music Waves has been held 13 times since 2004, and has a potential broadcast and social media audience of millions of viewers.  After a lively set of classic Bahamian tracks and pop songs from the team of musicians, Julien “Believe” ended with a medley of his “Junkanoo Pop” hits, and had the audience in a dance circle, teaching them a few steps.  The entire studio audience, including a few children, also posed for with the Bahamian vocalists for a few photos, showcasing the ability of music to help create friendships and encourage cultural exchange.  (BIS Photos/Eric Rose)

This article was written by Eric Rose – Bahamas Information Services.