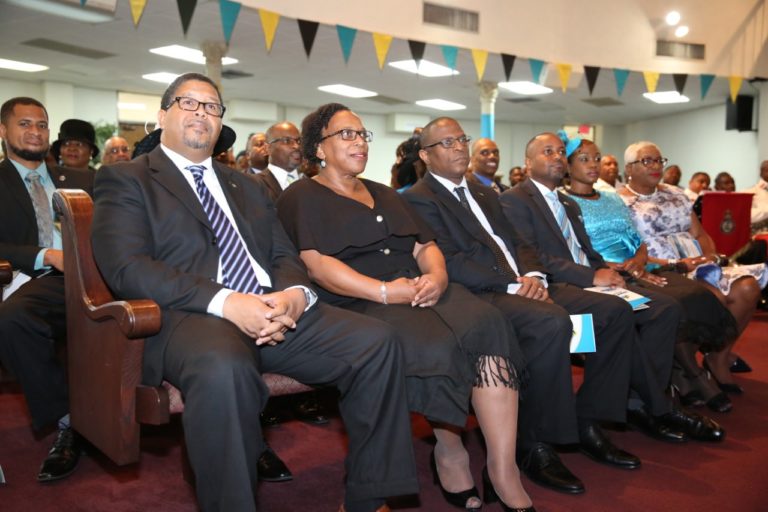 Making a better Bahamas for future generations is what Bahamians should focus on when singing the National Anthem – a call to action to improve the country, said Deputy Prime Minister and Minister of Finance Peter Turnquest on Sunday.

He made this call during the Ecumenical Service of Thanksgiving at Calvary Temple Assemblies of God in celebration of the 45th Anniversary of Bahamas Independence.  The 45th Independence celebrations are being held under the theme, ‘Celebrate Bahamas: We’ve Come This Far By Faith.’

Among those attending the service were: President of the Senate Katherine Smith; Minister of Agriculture and Fisheries Michael Pintard; Minister of State for Grand Bahama in the Office of the Prime Minister Senator Kwasi Thompson and Mrs. Thompson; Parliamentary Secretary, Ministry of Works and Utilities, Iram Lewis and Mrs. Lewis; other Members of Parliament and senior government officials.

The Deputy Prime Minister said Independence was not one man’s dream or ambition, but “the common loftier goal of a people, it was an earnest movement to create a better way of life for all Bahamians, for opportunity and prosperity, for freedom and equality”.

“When people sing the National Anthem, it is a call to action to keep improving the country – a call that does not end,” Turnquest said.

“The National Anthem calls residents to keep the spirit of Independence alive.”

Turnquest asked the congregation to do three things every time they remember the moment the Union Jack was lowered and the Bahamian flag hoisted: draw inspiration from the past — the founding fathers and mothers of the country through their vision, afforded many freedoms and opportunities; use that inspiration to strengthen the necessary resolve to do the work needed today, as the country is very different today and the world is more competitive; and participate in shaping a better tomorrow for all Bahamians, as each generation has done something to improve the lives of the generation to follow.

It was after Independence that equal access to education was granted, then higher education was attained; and for future generations, it is important that education translates to economic empowerment.

“If we are to honour the spirit of Independence we cannot treat is as though it were a thing of the past. We cannot commemorate the day every July 10, we must embody the spirit each and every day. If we put our faith in God and honour our pledge to our country, the reward will be success in building a better Bahamas for all,” he said.

“(My prayer is) that example set by our ancestors, our national leaders and heroes will continue to guide us and fill us with inspiration. My prayer today is that we will be as committed and courageous as they were when we face the challenges of today. And finally, my prayer for us all is that we might be united in love and service as we work to build a brighter future for The Bahamas.”

This artice was written by ROBYN ADDERLEY, Bahamas Information Services.