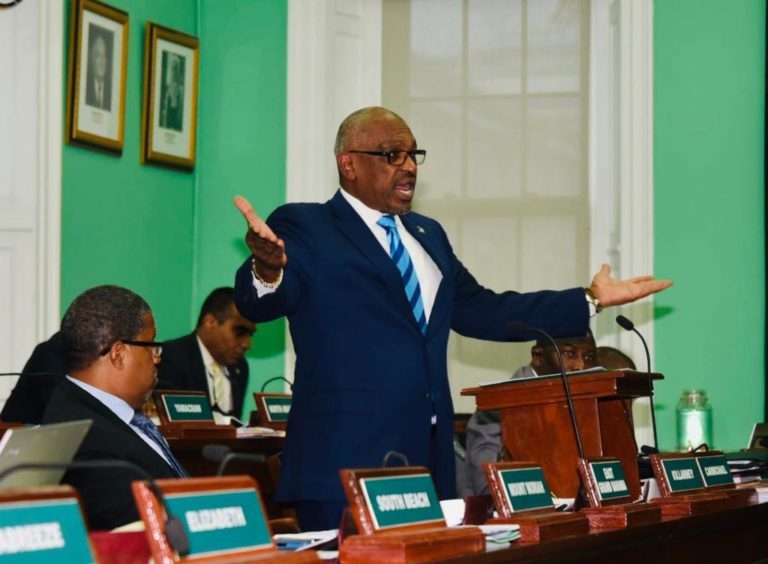 Prime Minister Dr Hubert Minnis gestures during his contribution to debate on the disaster bill in the House of Assembly in October 2019. (BIS PHOTO)

Minnis pledged that the government will strengthen and enforce the country’s immigration policies during his wrap-up of the mid-term budget debate, adding that the country’s social services and health system “can take no more’.

He stressed that The Bahamas is for Bahamians and must remain so, noting challenges faced by Turks and Caicos where he said illegals now outnumber legal residents.

“We must strengthen and enforce our immigration policies,” Minnis said.

“We must pursue illegal immigrants aggressively. This is the Bahamas and Bahamians are first. Bahamians will and must remain first. I have given the minister with the responsibility for immigration the task of establishing a strike force whose mandate would be to aggressively pursue illegals both throughout New Providence and the family islands through our streets and various job sites.”

“Bahamians who employ illegals will and must be prosecuted. We cannot continue to allow a lawless society if we are to protect our citizens. Jobs are first and foremost for Bahamians.”

Still, he noted that the government cannot tackle the immigration issue alone.

“I urge Bahamians that your government cannot do it it alone. We all have a responsibility,” Minnis continued.

Minnis added: “We have to aggressively ensure that succession planning is first and foremost and the absence of individuals not properly being trained that trainer had failed and must be replaced by a new trainer so they do not establish foundation in our country and take further jobs from our citizens.”