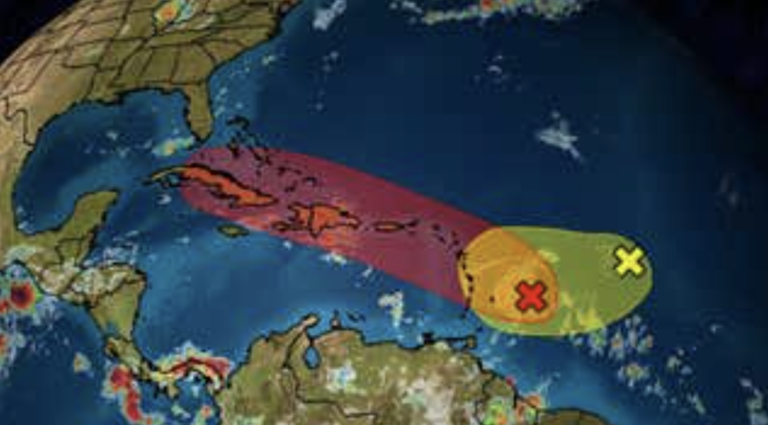 A projected storm path of Tropical Storm Fred as seen on Monday, August 9, 2021.

Southeast islands assure they’re prepared and shelters have been readied

NASSAU, BAHAMAS — Meteorologists are closely monitoring a tropical wave that is expected to develop into Tropical Storm Fred later this week and bring heavy rainfall and strong winds over the southeast Bahamas.

The projected storm is not expected to make landfall, but the southeast islands fall within the outer bands of the system’s forecasted track.

The disturbance was last located around 100 miles east-northeast of Barbados.

Senior Deputy Director in the Department of Meteorology Jeffrey Simmons told Eyewitness News: “We’re watching it and it definitely looks like it’s going to develop into a depression, probably a tropical storm, by Tuesday evening or Wednesday.

“The projection on it so far looks as if it’s going to be affecting our southern islands — Mayaguana, Inagua, Acklins, Crooked Island and probably even Ragged Island.

“We’re keeping our eyes on it and we’re watching the development, so we could start issuing some alerts for the southeast Bahamas as early as tomorrow evening or Wednesday.”

Asked what those islands could expect, Simmons said a lot of rain and a maximum of 50 miles-per-hour (mph) winds.

“Of course, flooding too because there would be heavy rainfall,” he said.

“Mostly the rain would be of a concern at this time than anything else.”

Acklins and Crooked Island Administrator Gilbert Kemp said he was satisfied with preparations on the islands, noting the Department of Social Services has ensured the readiness of the shelters.

Inagua Administrator Marlon Leroy also said the island’s three shelters were prepared and another meeting with the National Emergency Management Agency (NEMA) was set for this morning.

“Everything is in place and I spoke to all of my department heads this morning and the RBDF (Royal Bahamas Defence Force),” Leroy told Eyewitness News.

“The shelters are prepared and everything is here. We are ready. I think we have a meeting with NEMA tomorrow to finalize everything. But here on the ground, we are ready.”

While the National Hurricane Center said the system continues to show signs of organization, it lacks a well-defined center.

A tropical depression will likely form later today or tonight as the system moves west-northwestward at around 15mph, according to the center.

The disturbance is forecast to move through portions of the Lesser Antilles tonight, then move near the Virgin Islands and Puerto Rico on Tuesday.

It will then move near Hispaniola on Wednesday.

“Tropical storm watches or warnings could be required this afternoon with shorter-than-normal lead times for portions of the Lesser Antilles, the Virgin Islands and Puerto Rico,” the center said.

“In addition, heavy rains and flooding are likely for the Leeward Islands, Virgin Islands and Puerto Rico.

“Interests in those areas should monitor the progress of this system.”

The disturbance has an 80 percent chance of development over the next 48 hours.

Another low-pressure area in the Atlantic is no longer expected to develop.

There have been five named storms of the 2021 Atlantic Hurricane Season so far, including Ana, Bill, Claudette, Danny and Elsa.

Elsa has been the only storm to impact The Bahamas for the season, though no system has made landfall to date.

Wish to have more accurate Bahamian information regarding the current whereabouts of Tropical Storm Fred.
Thanks.