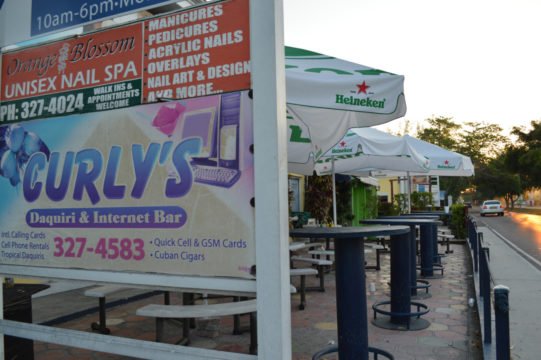 NASSAU, BAHAMAS – A masked gunman stormed the premises of Curly’s Restaurant and Bar on West Bay Street around 2 a.m. yesterday and held patrons and an employee at gunpoint before robbing the nighttime spot.

According to sources, the gunman walked from the street and weaved through the populated restaurant, pointing a firearm at several patrons as he demanded, “who works here”.

He ordered that patrons “leave” before robbing the business and fleeing in an awaiting vehicle.

No one was harmed during the incident, according to police.

It was unclear how much cash was stolen.

Authorities were yesterday searching for the man responsible and made their usual appeal for anyone with additional information to come forward.

There has been a spate of armed robberies in recent weeks.

On Monday, a gunman robbed a woman, who was sitting in her vehicle in the parking lot of a business establishment on Dowdeswell Street around 1 p.m.

Two armed men also robbed a man, who was at a residence of Coral Harbour Close around 10 p.m., of his watch, wallet, cash and gold Ford F-150 truck.

Prior to those incidents, authorities were investigating six separate armed robberies just over a week ago: two on April 12, three on April 13 and a sixth of April 14.