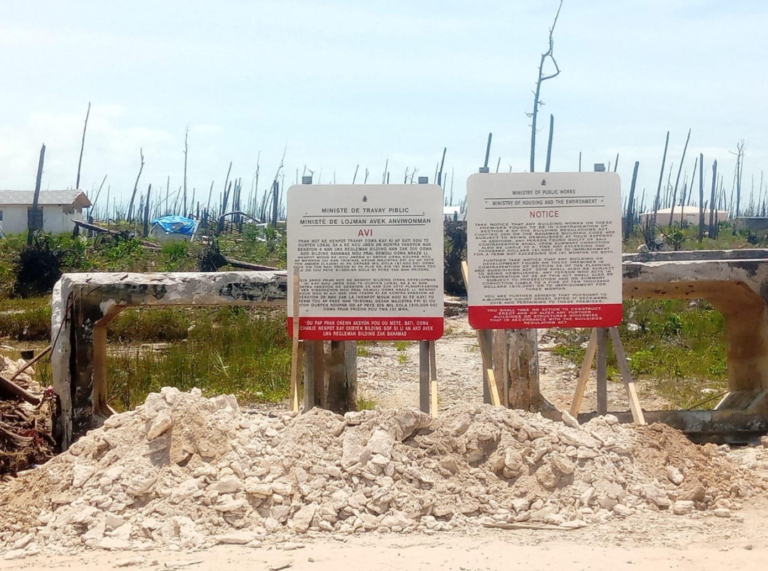 Signs posted in The Farm shantytown on Abaco in April 2021.

NASSAU, BAHAMAS — Minister of Public Works Desmond Bannister yesterday affirmed that demolition of unfinished and unoccupied structures in the shantytown known as The Farm on Abaco will be demolished in 14 days, while occupied structures will face the same fate in 28 days.

Notices have been erected on newly constructed structures — outside the 30 that withstood Hurricane Dorian — and large signs have been posted throughout the area, indicating that structures erected in contravention of the law will be demolished.

Bannister said: “We are a country of laws.

“We must all respect the law and act in accordance therewith, including our health and immigration laws and the building code.”

He said the government followed the orders of the court and did not interfere with those existing structures and others.

However, he said residents, in contravention of the orders, expanded and built new structures in what he described as a proliferation of unregulated homes.

“It is clear that these structures that were altered or erected after August 2018 without valid building permits blatantly disrespected and breached the court order and also contravened the provisions of the Buildings Regulation Act and the Planning and Subdivision Act,” he said in the House of Assembly.

“Mr Speaker, I must emphasize that this legislation was put in place to protect all of us.

“The horrible devastation in The Mudd from Hurricane Dorian clearly shows how persons can be injured and killed when structures are not built in accordance with the law.”

The minister also indicated that recent drone footage and inspections revealed “unsanitary and unhealthy practices”, which he said endanger health due to pollution of the water table with human feces.

“In the case of The Farm, this poses a real challenge in that the unregulated structures threaten to spread all the way to Treasure Cay and to impact their groundwater.

According to Bannister, there has also been a proliferation of commercial-sized generators and the sale of electricity; residents allegedly stealing electric wires from Bahamas Power and Light to power the shantytown; unregulated services and shops; and the sale of alleged stolen goods within the unregulated community.

Bannister said Bahamians have contributed to the breaches and benefitted financially.

One such example is heavy-duty equipment being used to construct accessways and roads, which enable construction of even more structures in the area.

A joint operation last Thursday resulted in the confiscation of a number of generators that were suspected of being stolen, and the arrest of several irregular migrants and others who were alleged to have committed crimes.

The minister noted that much of what has occurred took place with the complicity of many Bahamians, and that, where found, those individuals will face the law.

Law enforcement will remain in the area to prevent further breaches and new construction.