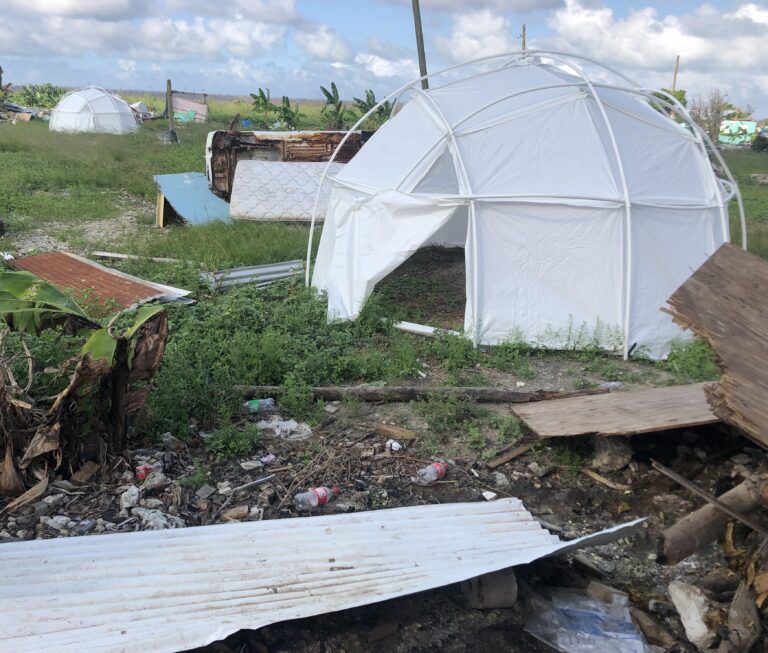 Tents erected in The Farm shantytown on Abaco in the aftermath of Hurricane Dorian in September 2019. (FILE PHOTO)

ABACO, BAHAMAS — A multi-agency operation launched in The Farm yesterday led to the arrest of irregular migrants and “other persons who are suspected of being involved in various criminal offenses”, according to the Ministry of Works.

The operation follows warnings from Minister of Public Works Demond Bannister last month that “decisive action” will be taken against unregulated communities in Abaco.

The ministry said the operation also resulted in the seizure of suspected stolen goods and the disconnection of a large number of illegally operated generators and gas tanks.

Photos and video footage purportedly showing law enforcement officers and what appeared to be dozens of generators and other items loaded on a flatbed truck in The Farm made the rounds on social media yesterday.

“The illegally constructed access roadways were closed; and signs written in English and Creole were erected,” read the ministry’s statement.

“The signs warn inhabitants of the legal prohibition of any new construction and of the intention of the government to demolish all of the illegally constructed buildings.”

The ministry noted that law enforcement will maintain their presence in the area to enforce the notices as personnel in the Ministry of Public Works carry out “their legal mandate during the upcoming weeks”.

In a statement, Human Rights Bahamas (HRB) condemned what it called the “illegal, aggressive and regressive invasion of people’s homes in Abaco”.

The organization said the government “will not get away with” their actions and justice will be done in the end.

“There is no legal justification for breaking and entering into family homes and removing personal belongings,” HRB alleged.

“People who have struggled and suffered through Hurricane Dorian yesterday had their groceries, their personal items and appliances cruelly stolen from them by the government authorities.

“It is nowhere near enough for the Ministry of Works, which is not a law enforcement agency, to claim that the residents are guilty of this or that offense.

“Everyone in The Bahamas is innocent until proven guilty.

“Where is the court order that allowed this heinous action to take place?

HRB said the joint operation was a display of brute force and intimidation and a calculated move to frighten and scare off residents.

“The intended audience for this shameful spectacle is clearly a political one,” the non-governmental organization said.

“They have been met by a legal challenge in that regard, and so now, they are pandering to the shallowest, most crass and xenophobic elements of our society.

“The government should not think they will get away with this.

“It will end up being yet another acute embarrassment of The Bahamas, both in the courts and on the international stage. In the end, justice will be done.”

In an affidavit filed in the Supreme Court and dated March 10, 2021, HRB President Stephanie St Fleur referred to the shantytown communities on Abaco as “ethnic Haitian organic communities”.

Abaco was one of two islands pummeled by Hurricane Dorian in September 2019.

The record storm wiped out several unregulated communities, known as shantytowns, including an area known as The Mudd.

The Supreme Court granted an injunction in August 2018 preventing the government from demolishing the structures in the shantytowns, including disconnecting utilities.

However, in the aftermath of Dorian, the government implemented a six-month ban on any new construction in shantytowns on Abaco and commissioned several contractors to clear remaining debris.

Respect Our Homes Limited has claimed the government’s action was procedurally unfair, discriminatory, inhuman and degrading to “simply bulldoze hundreds of homes and put hundreds of poor people and their children out on the streets as homeless victims of an unconstitutional, discriminatory, anti-Haitian ethnic community government policy”.

Abaco is still in recovery as hundreds of families rebuild.

Right Bahamas President is overlooking the fact that these people broke the law!! they are not properly documented, number one, number two, they build on land that does not belong to them, they did not get permission, number three, they knew all of this but went ahead anyway, build homes and made provisions for their electrical and gas needs. Now how is this ok? We as a country , are suffering because we call bad good and good bad. We make excuses to cover up things for different people. We have gone a-whoring after other gods and we are suffering for it. If we stop to think about the children of Israel and what they went through and why, we will be looking at ourselves. Read your bible. You cannot step out on the wrong foot and end up right!