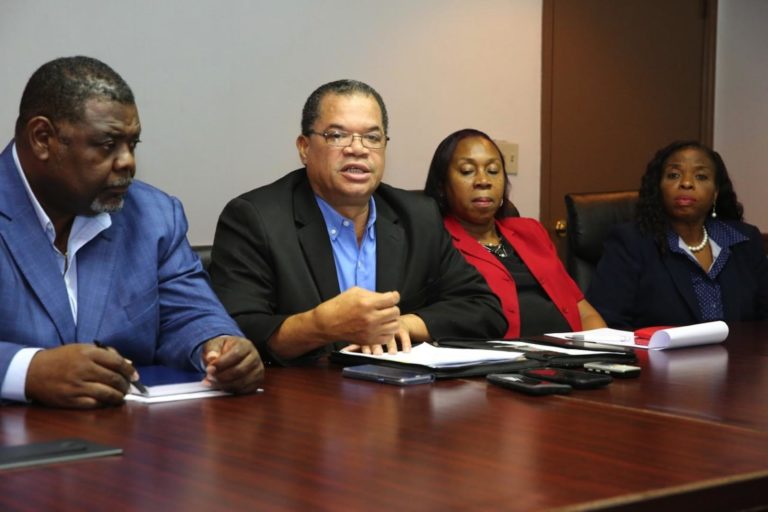 Minister of Labour, Senator Dion Foulkes (centre) was in Grand Bahama on Thursday, June 28, 2018 to announce appointments in the department and to give the latest statistics on employment in Grand Bahama. At left is John Pinder, who was recently appointed Acting Director of Labor. At right is Janet Russell, who was appointed to the position of Assistant Director in the Department of Labor in Grand Bahama. (BIS Photo/Lisa Davis)

Minister of Labour Senator Dion Foulkes Thursday said that Grand Bahama is the only island in the country that has shown a decrease in the unemployment rate, according to the Department of Statistics.

Addressing labour concerns, the minister stated that the last report from the Department of Statistics revealed that, “there was a decrease in the unemployment rate here in Grand Bahama.”

“The government and the labour department are pleased with what is taking place in Freeport, with respect to employment,” Foulkes said.

“We are pleased that the industrial side of Grand Bahama is doing extremely well and that accounted for a decrease in the unemployment rate.”

Construction company Bahama Rock has increased its workforce this past year by 10 per cent and that across the board, all of the industrial sector companies have been employing people, according to Foulkes.

Although only “incrementally – it still adds up to big numbers,” he pointed out.

“Pharma Chem is about to embark on a multi-million dollar expansion of their services and this is expected to create permanent jobs,” he stated.

GIBC Digital – which launched its opening on Wednesday – also hired 25 people and is expected to hire 25 more. Foulkes noted that the companies mentioned boast high-end paying jobs and he is very pleased about that.

“There are six other companies that we have already approved to establish an office here in Grand Bahama as a result of the Commercial Enterprise Bill,” he said.

“As a result of our Labour on the Blocks initiative Clear Blue, which has a relationship with the GB Shipyard, has already trained 50 persons in hard skills for the shipyard and all 50 of them are now working at the shipyard.”

Foulkes said while he did not want to pre-empt announcements by Prime Minister Dr. Hubert Minnis and Minister of State for Grand Bahama Kwasi Thompson, Grand Bahama can expect “excellent news” very soon.

“I would say that the government is very optimistic about Grand Bahama and what’s going to happen in Grand Bahama over the next several months,” he noted.