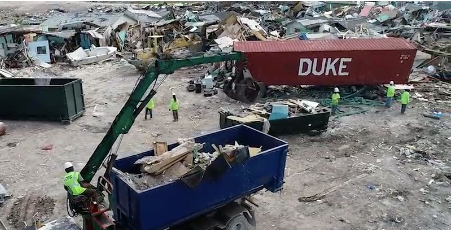 NASSAU, BAHAMAS – A law firm representing strangers seeking to be added to the ongoing shantytown court action plans to argue that contravention of the country’s building laws is a criminal matter.

Attorneys representing 177 New Providence and Abaco shantytown residents were served a summons on Thursday, which included skeleton arguments that intend to prove building in contravention to the Building Regulations Act is a criminal offense.

James Roosevelt Thompson & Company has applied to add Gregory Bowe of San Andros and Shawn Nixon of Marsh Harbour as third-party applicants in a bid to lift the injunction blocking the demolition of shantytown structures.

Bowe and Nixon are seeking to have the injunction discharged as strangers, but if this application is dismissed they intend to file for the injunction to be discharged or amended to require the shantytown residents to “act under the principles that he who seeks equity must do equity”.

The firm is also seeking an order to add Commissioner of Police Anthony Ferguson as a respondent in the matter, and that he be ordered by the court to enforce the criminal sanctions of the law in respect to shantytown communities throughout the country.

Meanwhile, the government has also filed additional documents to vary the injunction on January 14, including a second sworn affidavit by Minister of Labour Dion Foulkes – who served as chairman of the Shantytown Action Task Force.

Foulkes argued for applicants on Abaco to be excluded from the injunction, given that Hurricane Dorian destroyed “nearly 100 percent” of shantytowns on the island.

The skeleton arguments submitted by James Roosevelt Thompson & Company argue that the attorney general wrongfully conceded to the residents of the shantytowns that the unregulated building is a civil wrongdoing requiring notice for the Minister of Works to act against the residents of shantytowns under the act.

“Thus no notice whatsoever except specified in the act (28 days) is required for the minister or COP to act against the residents,” read the skeleton argument submitted by the government.

It furthered that the shantytown residents and their counsel obstructed the execution of the act when they sought the injunction.

The arguments point to the Law and Atkins Court Form, noting that the “the plaintiff must prove that he is entitled to the right to remain in the homes or keep them even if unsafe to the public, to obtain the injunction that he obtained”.

Citing Article 26 of the constitution, the law firm also argued that persons cannot be subject to different treatment due to place of origin.

It furthered that a Bahamian citizen has to comply with building regulations, and so should Haitians and other residents in the shantytown community.

“It is therefore submitted that the injunction should be discharged with costs payable by the plaintiff with damages to be assessed against the plaintiff for having obtained an injunction to which they were never entitled,” the skeleton arguments read.

In the aftermath of Hurricane Dorian, Prime Minister Dr Hubert Minnis instructed to the attorney general to return to court to have the injunction lifted.

The move came after the government implemented a six-month ban on any new construction in shantytowns.

Among the affidavits filed in the matter to vary the removal of the injunction are statements from Peter Douglas, a former Andros Chief Councillor; Donna Stubbs, a Fresh Creek resident.

Douglas swears in the affidavit that there are three large shantytown communities in North Andros, with 300 to 400 residents in each, along with “several other smaller areas and various Haitians living in bushy areas”.

Douglas stated that he is certain Andros police and the Immigration Department are aware of their existence.

Stubbs’ affidavit offers support for Douglas’ claims and request the injunction be removed as a “matter of national security”.

The government gave shantytown residents of New Providence until August 10, 2018, to evacuate those communities, and residents of shantytowns in Abaco, until July 31, 2019 to leave.

However, days before the deadline lawyers representing 177 of those shantytown residents filed an application for leave to apply for judicial review on the government’s eradication program.

Supreme Court Justice Cheryl Grant-Thompson granted an injunction barring the government from moving forward with its plans to evict residents from shantytowns in New Providence and blocked demolition of the structures.

The applicants are Respect Our Homes Ltd, and some 117 residents shantytowns in New Providence and Abaco.

The respondents in the matter include Prime Minister Dr. Hubert Minnis, who has responsibility for lands; Minister of Labour Dion Foulkes, chair of the Shantytown Action Task Force; Minister of Public Works Desmond Bannister; Attorney General Carl Bethel; Bahamas Power and Light; and the Water and Sewerage Corporation.

Tear them down…..God began the process with Hurricane Dorian, now finish it or he will! There are so many lawbreaking stands against those shantytown structures and communities until it’s ridiculous! When in The Bahamas, you must comply with our laws or exit!

We must rid The Bahamas of this vexing problem at once and for all!