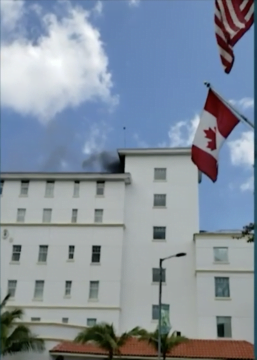 NASSAU, BAHAMAS – Vacation time was paused on Tuesday for hundreds of visitors staying at the British Colonial Hilton Hotel, due to a fire which started shortly after 11:00 a.m. on the 7th floor elevator shaft in the eastern wing of the hotel.

According to the Royal Bahamas Police Force’s Director of Fire Services, Chief Supt. Walter Evans, no injuries were reported.  He noted, however, that all workers in the east wing of the hotel, including staff at the Ministry of Tourism and Aviation – which also occupies the hotel –  were sent home due to the penetration of heavy smoke.

Evans said the smoke presented a challenge for fire fighters to get the hotel up and running again.

“Where it [the fire] was in the elevator shaft, the smoke travelled throughout the building, which activated the smoke alarms and the voice alarm systems,” Evans said. “There were some challenges with removing the smoke because some of those areas have no windows…nor are there any doors.”

Nonetheless, Evans said that he and his team will work together to resolve the issue.

“There’s relatively a good bit of smoke in the stairwell, which means we are not able to use that. However, we’re going to see how best we can pull the smoke from that area.”

A visiting couple celebrating their 20thwedding anniversary at the Hilton decided to commemorate their love where it all started.  And despite the unfortunate occurrence, Francine and James Anthony told Eyewitness News Online that the fire did not damper their vacation.

“We arrived yesterday, Monday, the 3rd, which was our 30th wedding anniversary. We stayed here 30 years ago, so we came back and of course right after breakfast, the fire alarm sounded and we had to evacuate.”