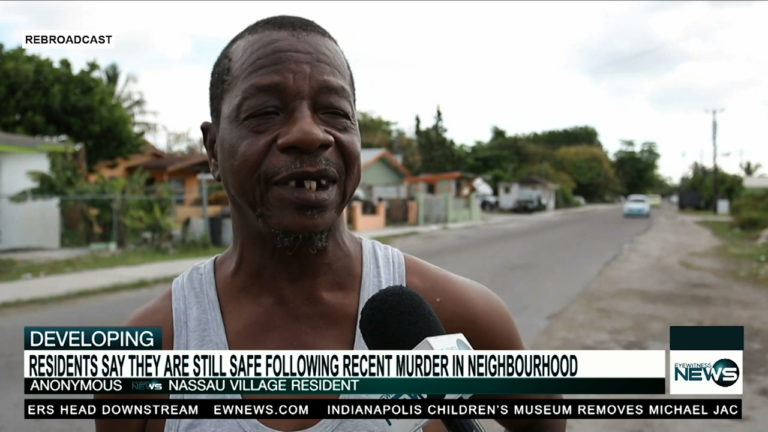 NASSAU, BAHAMAS – Despite a recent shooting incident in Nassau Village that later became a homicide over the weekend, residents of the southern area told Eyewitness News on Monday that they are not alarmed.

And while Nassau Village residents shared mixed views yesterday about crime unfolding in the area, they all shared the same belief that Nassau Village is relatively a safe place.

“I feel safe here in my community. I feel safe in my country. Overall, we have incidents that happen everywhere and as a citizen I have decided to not allow the fear of crime to not make me feel safe,” said Mandel Miller.

Another resident who spoke on the condition of anonymity said, “Normally, it ain’t really how people think. We have some strays that come in and out. No one is going to use the bathroom and then put the toilet tissue the same place. We can’t just push the blame and say the individuals are from Nassau Village.”

According to police reports, shortly before midnight on Sunday, a man was at Cliffy’s Bar and Liquor Store on Taylor Street in Nassau Village, when an armed male forced his way inside and shot him several times about the body, before fleeing on foot. The injured man was transported to hospital where he later succumbed to injuries.

Attempts to speak with the store’s owner and employees on Monday proved futile.

Also, up to post time last night the victim’s identity had not been released by police.

Meanwhile, residents told Eyewitness News that gunshots are common in the area thus many residents were not knowledgeable about Sunday’s shooting incident, despite living only a few feet away from where it all unfolded.

“I was home all day and I didn’t hear anything,” one resident said. “If I didn’t wake up this morning and hear it I would’ve never known. I’ve heard it [gun shots] from time to time.”

“It’s common because you don’t know between the police busting shots and [fellas] busting shots, and there are plenty licensed firearms so people may be shooting birds,” another resident surmised.