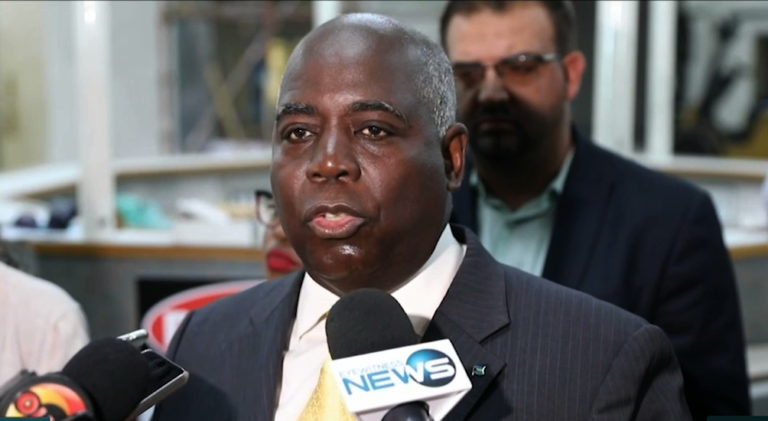 NASSAU, BAHAMAS – Progressive Liberal Party (PLP) leader Philip Brave Davis expressed on Tuesday that the party “welcomes” the departure of Brent Symonette from the Cabinet of The Bahamas.

“It was the prime minister himself who sanctioned the award of government contracts worth tens of millions to companies in which Brent Symonette or his children have significant financial interests, so it is the prime minister who must answer…,” said Davis, who was speaking yesterday at the PLP’s weekly press briefing at Gambier House.

Davis was referring to the government’s decision to relocate the General Post Office from East Hill Street to Town Center Mall, of which Symonette has shares in the latter.

Symonette has also revealed on more than one occasion that his children’s trust has shares in Bahamas Hot Mix – a company that was recently awarded a $20 million contract to complete repaving work at the Lynden Pindling International Airport.

Symonette, the former Minister of Financial Services, Trade and Industry and Immigration officially announced his resignation on Sunday. His portfolio was transferred to former State Minister of Legal Affairs, Elsworth Johnson, who was officially sworn in Tuesday.

According to Davis, the prime minister failed to ensure that it was “the people’s time” because instead of looking for Bahamians, he allegedly selected a few within his inner circle to prosper economically.

Davis said since the government came to office in 2017, many small contractors are reportedly denied employment opportunities and are forced to claim unemployment.

PLP supporter Dwight Knowles, 58, said he has faced similar challenges like those mentioned by Davis, since the FNM took office in 2017.

“I was a contracted worker and I’ve lost my contract for no particular reason,” Knowles lamented. “I’ve known a lot of persons that were contract workers from year-to-year and they’ve lost their jobs for no apparent reason. So, in my view, the government is going in the wrong direction as it relates to the populous.”

Meanwhile Davis said that it is ultimately the job of the Bahamian people to ensure that the government is brought to justice as well as the suspects involved in the mass shooting that occurred last weekend in Montell Heights.

“We need as a country to do a better job keeping people safe,” Davis said. “It’s just that simple. Here again, we need serious policy and investment, not propaganda.”

This article was written by Marechan Burrows – Eyewitness News Intern