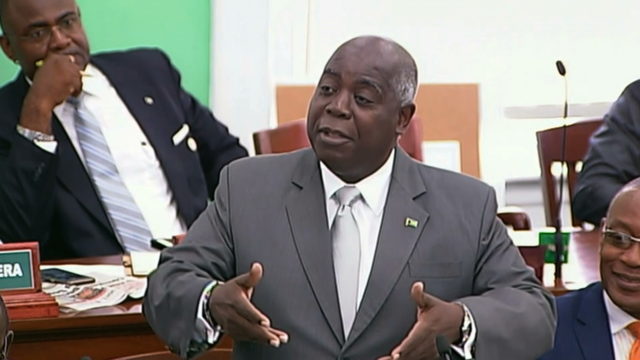 NASSAU, BAHAMAS – Expressing shock at the abrupt resignation of Bahamas Power and Light (BPL) Chief Operations Officer (COO) Christina Alston, Opposition Leader Philip Brave Davis said yesterday that the latest developments at the power company are “sad and frightening” and the public ought to be concerned.

“I have been shocked so often over the last two years I am becoming immune to it,” Davis said in response to questions from the media during a press conference at the Progressive Liberal Party’s headquarters on Farrington Road.

“It is sad and it is frightening and we all ought to be concerned about these developments in our country. It is clear for such an abrupt departure that something smells.

“We just need to know what it is that is smelling.”

The abrupt departure once again threw BPL’s executive team under the spotlight.

Osborne and other BPL board members were replaced by a new board in August 2018.

In a statement Monday, which praised the work ethic, experience and professionalism Alston brought to BPL, Osborne said her resignation marked a “sad day for BPL and the country”.

Yesterday, Davis said he believes the government’s deals with Shell/Wartsila deals appear to be at the heart of many of the challenges unravelling at BPL.

In a March 12 letter to Prime Minister Dr. Hubert Minnis, Davis raised a number of questions concerning both deals.

He wrote that a proper explanation has yet to be provided to the public as to why the government selected Shell to construct a new plant at Clifton Pier.

The government signed a memorandum of understanding with the company for the 270 megawatt power plant last November.

That month, the prime minister revealed in Parliament that the bidding process to supply BPL with temporary power and fuel was moved from the purview of the power company and put under the Office of the prime Minister, where an independent committee reviewed the bidding process for irregularities.

He said when it was subsequently determined that Shell won the bid, an independent analyst was brought in to review the process and found that there might have been one or two irregularities in the process, but none that would have change Shall as the top bidder.

Concerns by bidders arose because the request for proposals was thought to be specific for short-term power generation and the supply of fuel oils, but the contract awarded to Shell provided for the construction of a new energy plan and regasification facilities — a point Davis raised in his March 12 letter.

He also raised concerns that while Shell was expected to provide power using liquefied natural gas (LNG) and cover the cost associate with the build, BPL’s management recently announced it will install 132 megawatts of generation capacity at cost.

The $95 million project includes the installation of seven new Wartsila engines at BPL’s existing Station A building at Clifton Pier.

BPL CEO Whitney Heastie has insisted the new power plant by Wartsila will not conflict with the MOU signed with Shell.

But Davis asked, “When did this change come about?

“Were discussions with Wartsila underway prior to the signing of the MOU with Shell?

“Was the dismissal of the previous board members related to this matter?

“It is also noted that there were no board members present when the press conference was held to announce the $95 million agreement.

“For such a major announcement this is most surprising.

“Is the present board being bypassed similarly as to what was alleged to have taken place with the previous board?”