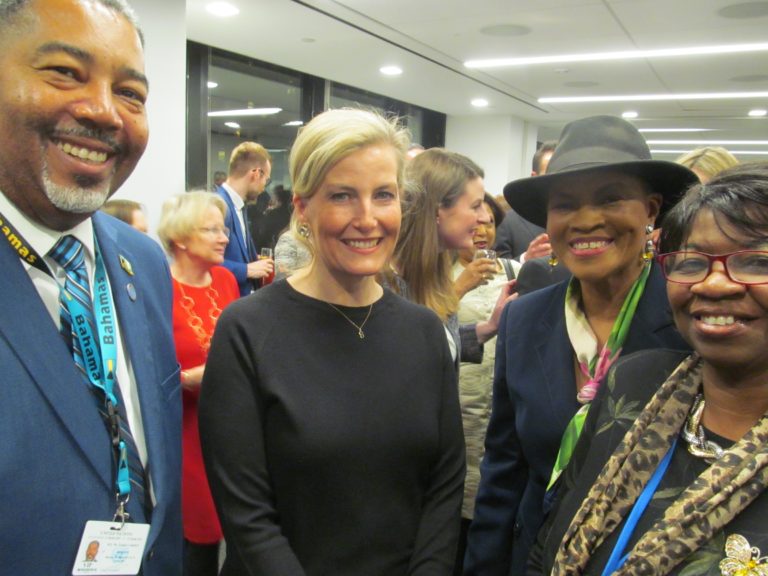 Minister of Social Services and Urban Development, Frankie A. Campbell with Her Royal Highness Sophie, Countess of Wessex, GCVO (second left), at a reception celebrating women Mediators across the Commonwealth on the occasion of Commonwealth Day held at the Joint Office of the Commonwealth Permanent Mission in New York. Commonwealth Day was celebrated Monday, March 11, throughout the Commonwealth. The Countess is the wife of Prince Edward, Earl of Wessex, the youngest son of Her Majesty Queen Elizabeth II, and His Royal Highness Prince Philip, Duke of Edinburgh. Also pictured are: Her Excellency, Ambassador A. Missouri Sherman-Peter, Permanent Observer of the Caribbean Community (CARICOM) to the United Nations (second from right) and S. Ali McIntosh, Servant Leader of The Bahamas Constitution Party, one of the Bahamian political groupings with representation at CSW63. (BIS Photo/Matt Maura)

UNITED NATIONS, NEW YORK  — The Government of The Bahamas has partnered with many of the country’s non-governmental organizations (NGOs) as it continues to build alliances for social protection systems, access to public services and sustainable infrastructure for gender equality and the empowerment of women and girls.

Addressing a high-level interactive dialogue among Ministers on the priority themed, Campbell told delegates that proof of the Government’s commitment to building those alliances/partnerships lay in the fact in the size of the Bahamian delegation to the Sixty-Third Session of the Commission on the Status of Women (CSW63), many of whom paid their own way to attend the Session.

“I have the pleasure, Mr. Chair, of leading a delegation from The Bahamas of almost 90 women and this is by no accident, this is as a result of the Government of The Commonwealth of The Bahamas recognizing in the first instance, that we cannot do it alone and so we have partnered with non-governmental groups, faith-based organizations, trade unions, the Bahamas Red Cross, the Crisis Centre, advocates for persons with disabilities, schools, universities, victims advocate groups, political groupings, and other minority groups, to ensure that we have the support of carrying the message of mindsets that need to be changed.”

Campbell said Small Island Developing States (SIDS) can be “very political” in their approaches, oftentimes leading to a point where a good message can be overlooked “depending on who is bringing the message.”

“And so through these partnerships, we are satisfied that we are able to have a whole broad cross-section of persons bringing the message. We are also of the realization that when the table is set, either you are sitting at the table or you are on the table as the menu. We want to ensure that our women and girls are being prepared to sit at the table to ensure that their voices are heard and their views are considered, and so a part of this delegation that I am pleased to lead includes at least 15 per cent of persons under 30 years of age.

“These persons have come to see and hear for themselves, that they are able to go back and personally represent the movement throughout the communities; that they are able to influence their various age groups. We are satisfied that this is about partnerships, but not just with women (but) partnerships also with both men and boys. Partnerships that will satisfy the men and the boys that there is no threat to their position and that the women need to be prepared to hold hands with them as they advance.”

“Whatever you do on one side, in order to get balance you must do it on the other side,” Minister Campbell said to a rousing round of applause from delegates. “And so I am pleased to say that as we focus on the women and girls, we want to

This article was written by Matt Maura – Bahamas Information Services