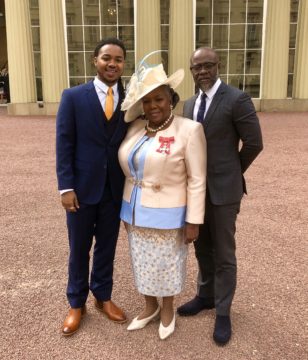 LONDON, England – Janet Bostwick, the first woman elected to the House of Assembly in The Bahamas, received her appointment as Dame Commander of the Most Excellent Order of the British Empire, at an investiture at Buckingham Palace on Thursday.

Prince William, the Duke of Cambridge, officiated at the ceremony.

“I am both humbled and honoured to have been chosen for such a prestigious honour,” said Dame Janet after the investiture.

“I thank the Bahamian people for this award. In accepting the damehood, I was pointedly reminded of the still continuing struggle of Bahamian women to remove every vestige of inequality and discrimination from not only our nation’s national life, but from the very personal relationships of women, whether in their homes or on the job.”

Dame Janet has spent her life working to advance the rights of girls, women and the underprivileged in The Bahamas. She pledged on Thursday to continue that work.

“The Bahamas together with the world celebrated International Women’s Day on the eighth of this month. Once again, the cry for equal rights was raised. In particular, attention was drawn to the great disparity in many instances in pay to women as compared to men for work of equal value,” said Dame Janet.

“The adverse effects of domestic violence were also highlighted, as well as the underrepresentation of women in the decision-making process of national life. We must never cease to address and remedy these and other issues affecting our girls and women.

“I reiterate my commitment to continue to serve to enhance the standard and quality of life of all our people.”

Dame Janet was the second person to receive an award at the palace on a list of 64 people. The ceremony began at 11 a.m.

“It was a true privilege to be in attendance at Buckingham Palace and witness my mother be honoured with the title of Dame,” said son John Bostwick II.

“She has given her life selflessly in service to her country and the Bahamian people, second only to her God. She is truly deserving to receive this honour. And for those of us who know her, we are certain that she has much, much more to offer and the best is yet to come.”

Daughter Lisa Bostwick-Dean said: “I have watched my mother tirelessly give of herself to the people of The Bahamas my whole life. It was a pleasure to watch her receive this award.

“We are deeply appreciative of the love and support she has received from the Bahamian people.”

Prince William and Dame Janet shared a moment of pleasant, private conversation after he bestowed the award.

Dame Janet displayed extraordinary talents even as a young woman. She was head girl at The Government High School.

On graduation, Dame Janet started work as a clerk (stenographer) at the Legal Department in 1957. She became private secretary to the Attorney General and an administrator in the department.

Dame Janet fell in love with the law. She articled in the department to Gerald Corlett, former Attorney General, and was called to the Bahamas Bar in 1971. She was the sixth woman called to the Bar.

Dame Janet served as a Crown Counsel beginning in 1971, with special duties as Prosecutor in the Supreme Court. She left the department in 1975 when, together with her husband, John Henry Bostwick, they started Bostwick and Bostwick law firm.

Dame Janet and Henry fell in love when they were students of The Government High School. They married in 1961.

She was socially active from her days as a trade unionist. Dame Janet was the first female in The Bahamas to hold the post of Secretary General of the Bahamas Public Services Union. She became politically active in 1976 as a member of the Free National Movement (FNM).

Dame Janet was appointed Senator for the FNM in 1977. In 1982 she won the Yamacraw seat for her party, making her the first woman elected to the House. She would hold the seat for 20 consecutive years.

As the Member of Parliament for Yamacraw for those 10 years in opposition, Dame Janet fiercely looked after the interests of her constituents with little help from the then Government.

In 1992, after 25 years of Progressive Liberal Party (PLP) rule, the FNM won its first general election. Dame Janet was appointed to Cabinet.

She served as Minister of Social Service, Housing and National Insurance from 1992 to 1993, and from 1993 to 1994 as Minister of Justice and Immigration.

In November 1994 she was appointed Attorney General – the first woman to hold that position in The Bahamas, and the region. She also served as Minister of Foreign Affairs and held responsibility for women’s affairs.

Dame Janet was the first woman to act as prime minister. She also served as Deputy to the Governor General on two occasions.

She is credited with leadership in bringing about progressive change in laws relating to the administration of justice and the rights and status of women and children.

Although retired from frontline politics, Dame Janet remains on the Central Council of the FNM and supports civic organizations. She is Patron of The Girls Brigade.

Deeply religious, Dame Janet is a faithful Anglican. She is the mother of four – Margo, Kelley, Lisa and John – the grandmother of five and great-grandmother of one.