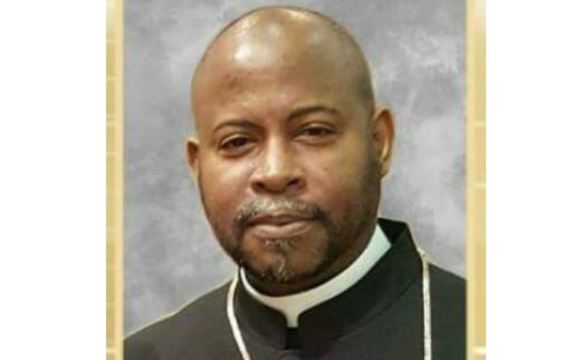 In what has many Christian believers questioning the tragic way a visiting bishop met his demise, Floridian Bishop Darryl Coleman, 51, died a hero, according to the other three victims who were in the rented dark blue Nissan Sylphy that crashed Saturday morning.

The 51-year-old had just opened a two-day revival where he was the guest preacher earlier that evening. The event was hosted by Miracle Faith Praying Station Church of God on Marshall Road.

“Following the assignment, he got into the vehicle along with one of our armour bearers Valentino Nottage, who was driving,” Apostle Kemp explained.

“Another American Apostle from the New York area, Shamar Williams, was in the front passenger seat. Bishop Coleman and his personal assistant Marina Dozer, were in the back seat.

“Around 1:00 a.m., they were on the Sir Sidney Poitier Bridge, a short way from the top of the bridge, and that’s when the driver, Valentino Nottage, began to have a seizure. His foot locked onto the acceleration pedal and the car began losing control at high speed.

“Apostle Williams tried to pull Nottage’s leg off of the accelerator, meantime Bishop Coleman from the back of the vehicle grabbed the steering wheel to keep the car on the bridge.”

The vehicle, we’re told, rammed through the toll booth and crashed into Club Landor’s wall, eventually flipping upside down. The vehicle burst into flames, and thanks to bystanders nearby, they were able to put out the fire.

Emergency medical services were said to be immediately dispatched to the scene and quickly rescued the occupants of the car.

Apostle Kemp said he was notified by Paradise Island police. He said by the time he arrived, the fourth and final ambulance was leaving.

“I still can’t believe how something so tragic happened,” he said.

“I was not expecting to see what I saw. I give God praise because no one should have gotten out alive. We had no idea my armour bearer had seizures, since the last time the issue plagued him was about a year ago.”

On Sunday, Apostle Kemp went back to the Princess Margaret Hospital (PMH) to visit the three survivors. All are expected to make full recoveries.

Visiting pastor Apostle Williams, according to Kemp, was in good spirits. He had facial surgery done, and some scar tissue. Dozer, Bishop Coleman’s personal assistant, sustained a broken leg and collar bone. She also had surgery on her face and head.

The most severe injuries were sustained by Nottage. He is listed in critical condition in the critical care unit (CCU). Eyewitness News understands that he was in and out of consciousness and has several broken bones.

“Although we lost Bishop Coleman, what he did was heroic in grabbing the wheel,” said Apostle Kemp.

Bishop Coleman also traveled to The Bahamas with family.

His wife, who was also supposed to be in the vehicle, has stayed at the hotel instead of attending the church service. The Colemans’ daughter was also, for unforeseen circumstances, not picked up.

“His wife is in positive spirits,” he said.

“She was out to service (Sunday morning), where we had a tribute for Bishop Coleman.”

Apostle Kemp said both the mother and daughter, to his surprise, came to the service which he described as wonderful. Bishop Coleman, who hails from Miami, Florida, has an organization of a number of churches.

“A lot of people have been affected by this. Some from the United States (USA) have called me after hearing about the tragic news, but I have no answers for their questions. We don’t understand why at the age of 51 – and in the prime of his life – God chose to take him in this manner. But we give God praise.”

Bishop Coleman’s last sermon was called ‘I’m coming out of Baca’. Taken from the book of Psalms. He spoke about hard times and tribulations.

“His experience last year was so tragic,” the apostle said about Bishop Coleman.

“He buried two sisters and his son-n-law. He spoke about his journey and near-death experiences, different accidents in the past that God brought him through, his experience in ministry and how he ministered the hard way.”

Since the tragedy, both the United States Embassy and the Ministry of Tourism (MOT) have been in touch with the church and the Coleman family.

On Monday, the family is expected to formally identify Coleman’s body, along with American Embassy and MOT representatives. Eyewitness News also understands that following the process, a funeral home will prepare his remains to return to United States by Wednesday.

I pray for the surviving victims and their families. My heart goes out to the family of the Bishop who passed. We never know when it’s going to be our time to leave this world. We don’t understand why things happen, but please understand that God is to great to make mistakes. Lord help us to accept what You allow. ??????