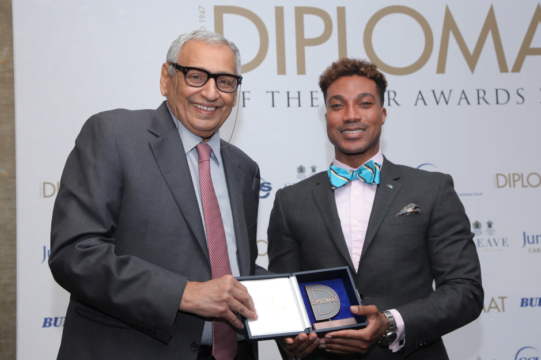 Mr. Wilfred T. Adderley II, Second Secretary/Vice Consul receiving the award for Young Diplomat of the Year 2019 from His Excellency Khaled Al-Duwaisan GCVO, Ambassador for Kuwait to the Court of St. James’s and Dean of the Diplomatic Corps.

London, UK -Mr. Wilfred T. Adderley II, Second Secretary/Vice Consul, at The Bahamas High Commission received the award for ‘Young Diplomat of the Year’ for 2019 at the 11thDiplomat Awards Ceremony organised by DIPLOMAT Magazine on April 29, 2019.

The awards ceremony was held at the Jumeirah Carlton Towers and was attended by Ambassadors, High Commissioners and Diplomats representing over 95 countries.

DIPLOMAT Magazine presents awards to the top diplomats in ten categories who were chosen by diplomats through a voting process.  DIPLOMAT’s Editor, Venetia de Blocq van Kuffeler, was quoted as saying: “This is an award ceremony for diplomats, with winners chosen by diplomats. This evening is about hard work and technique. It’s about people and professionalism.”

Mr. Adderley was presented the award by His Excellency Khaled Al-Duwaisan GCVO, Ambassador for Kuwait and Dean of the Diplomatic Corps.

His Excellency Ellison E. Greenslade QPM, High Commissioner of the Commonwealth of The Bahamas to the Court of St. James’s attended the awards ceremony and was accompanied by Mr. MarchéA. Mackey, Third Secretary/Vice Consul and Ms. Vernique M. Joseph, Finance Attaché of the High Commission.