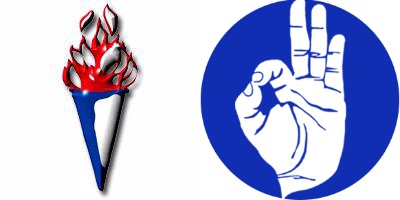 This combination of photos shows, from left, the logos of the Free National Movement (FNM) and Progressive Liberal Party (PLP).

NASSAU, BAHAMAS — Free National Movement (FNM) Chairman Carl Culmer said the party has ramped up its digital campaign to show the Bahamian people and those who remain critical of the Minnis administration’s record that it has done and continues to do a lot for the electorate.

“We have been selling what the FNM has been doing for quite some time,” he told Eyewitness News.

The FNM has continued to campaign on the COVID-19 pandemic, posing its leader, a doctor, as the right person to continue to lead the nation to a post-COVID era.

The party has also aired a high-quality production ad that underscores the FNM’s free education program and its features.

It ends with a shot of FNM Leader Dr Hubert Minnis, Education Minister Jeffrey Lloyd and UB graduate Celina Rolle on the university’s campus with the caption: “All the difference.”

One such ad, which opens with “Brave is a disaster”, uses a mixture of stock footage of the PLP leader, graphics and snapshots of newspaper headlines with a voiceover narrator.

“His last time in power, murder rates were at record highs; five years of negative or economic growth; and they drifted from scandal to scandal,” the narrator said in the ad.

“But for Brave, nothing has changed. No new ideas; no solutions. His economic plan, slammed by the media, with key points largely recycled; unfulfilled promises. We’ve come too far to turn back to politicians who serve themselves at our expense.”

The ad notes it is paid for by the Free National Movement.

Asked about the attack ad, the FNM chairman said: “I really haven’t been watching the ads that closely, so I won’t be able to tell you exactly. I mean, at the end of the day, our communications team has their job to do. I am here, working and going from door to door, talking to people.”

However, Culmer opined that the PLP’s campaign has been “dirty” and he expects the FNM will continue to counteract misinformation and “nasty” campaign tactics he claims are undertaken by the PLP.

One such well-circulated ad in recent months features Davis sharing key highlights of his early life, political career and vision for The Bahamas.

More recently, the PLP has released a series of ads on social media that closely resemble the FNM’s trademark colors, with messages blasting the party.

Mitchell said the ads have been to counter the FNM’s “degrading campaign”, which he labeled as the “nastiest” in Bahamian history.

The FNM ran an expansive digital campaign ahead of the last general election, a campaign that many opined contributed to the FNM’s ability to saturate the electorate with its message.

The increased presence of digital ads recently could also lend to the heightened speculation of an earlier election.

Over the last year, Minnis has maintained his administration will go the full term and the election will be called sometime in May 2022, but over the weekend said his party is ready “in the event things should change”.