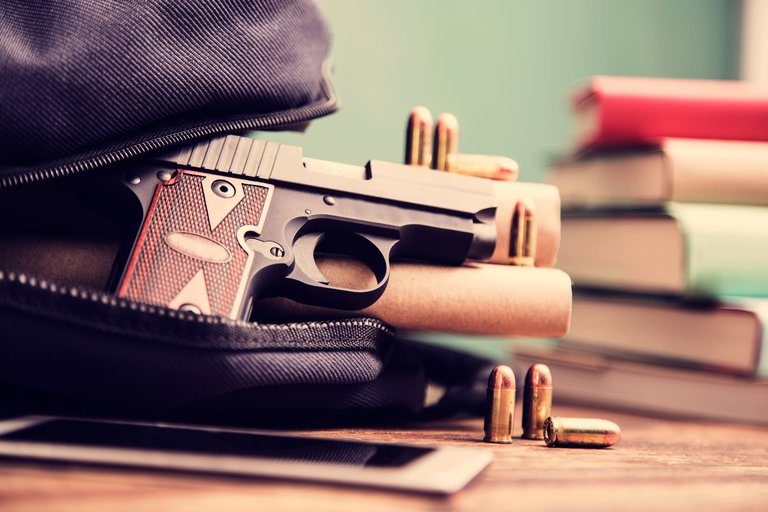 Fstop123/iStock, via Getty Images Plus

For nine months in Kandahar, Afghanistan, I went through the same routine every day.

I put on my uniform and tied my boots. I put a magazine in my 9-millimeter handgun and locked it in my hip holster. I put a 30-round magazine in my M4 and slung it over my shoulder. If the day included a patrol, I put on my body armor. I usually carried a knife and at least one tourniquet. Every day, our team discussed base security to identify where we were most prone to attack.

That was my standard procedure while serving with the United States Army in a combat zone. When I left active duty in 2014, I never expected that those skills would be applicable to my next job, as a high school teacher in San Jose, Calif.

But the reality is that much of what I learned in the Army is horrifyingly relevant in the classroom. My school conducted drills similar to those that took place at Marjory Stoneman Douglas High School in Parkland, Fla., even before a gunman opened fire last week and killed 17 people. Our first drill, during which staff practiced sheltering students and barricading doors, exposed countless weaknesses, making it obvious to me that we were woefully unprepared to protect our charges.

My classroom would be one of the first an attacker coming through the front entrance would see. So I set out to make it a “hard target” — a place that would appear difficult to attack — to deter an intruder.

The classroom was big, with doors on opposite ends. I wrestled with the idea of enlisting the help of my maturest students in securing such a large space, ultimately deciding that I would take only volunteers from my upper-class classroom aides.

I pondered how to construct impromptu blockades to delay or confuse an attacker. My helpers and I moved the cart of class iPads to where it could be easily pushed in front of the door — an ideal barricade. Still, the large windows extending the length of the room, once a pleasing feature, now looked only like a gaping vulnerability. We covered the windows in butcher block paper to obstruct the view from outside.

I also took a tourniquet from an old Army first aid kit and put it in the top drawer of my desk, alongside the calculators and pencils. I knew that if there were multiple casualties, a single tourniquet wouldn’t do much, but it might save one of my kids. I considered the fastest way to get my students into cover, or at least concealment, and agonized over how to keep dozens of 14-year-olds calm during an attack. I was preparing my classroom for combat.

But our school was built to cultivate learning, not withstand an attack; our teachers were trained to instruct, not shield students from bullets. Fortunately, I never had to confront the horror of a gunman roaming the hallways of my school. Still, Parkland could have been my classroom. Those kids — some of whom had only algebra textbooks as a defense against bullets — could have been my students. I felt more prepared than many of my colleagues because I knew how to stop bleeding, spot vulnerabilities and control a chaotic situation. Yet teachers shouldn’t need to have military or law enforcement experience.

As children and parents appear on TV begging for action, our elected officials insist that even the best gun control and safety reforms would not eliminate attacks.

Some, like Senator Mike Rounds, Republican of South Dakota, extol the virtues of layered defense systems, similar to those employed at military checkpoints. Education Secretary Betsy DeVos called for teachers to have the “opportunity and option” to carry weapons in school. President Trump has just proposed having “very weapons talented teachers” in schools, armed. Others suggest putting combat veterans in classrooms.

These people would prefer to subject our children to daily interactions with armed guards and our teachers to the awful possibility of using deadly force rather than engage in a principled conversation about gun control. Instead of curbing the violence, our leaders prefer to go on the defensive and fortify our schools against the next semiautomatic rifle that will “inevitably” walk through the door.

But our legal system is designed to evolve, to push us toward a “more perfect union.” Yes, we need to arm our teachers — with the support of effective gun control, comprehensive background checks, better information-sharing between local and federal authorities, engaged parents and school-sponsored mental health care providers to identify troubled students before they become killers. Taking actions that make these calamities far less frequent and far less deadly should not be a partisan issue.

When I took an oath to protect and defend, I did not consider that it would extend to my future classroom. Tragically, the heroism of educators in Parkland like Aaron Feis and students like Alaina Petty, Peter Wang and Martin Duque, cadets in their school’s Junior R.O.T.C. program, make it clear that unless we significantly strengthen gun control in this country, we must begin to expect the same levels of sacrifice from teachers and students when they pick up a pencil as we do of soldiers when they pick up a weapon.

For many of us, spending our youth in a military at war means that we will spend a lifetime memorializing our brothers and sisters who did not come home. That is not a reality that 14-year-olds should have to confront when they head to school for the day. America’s schools should not be a combat zone.