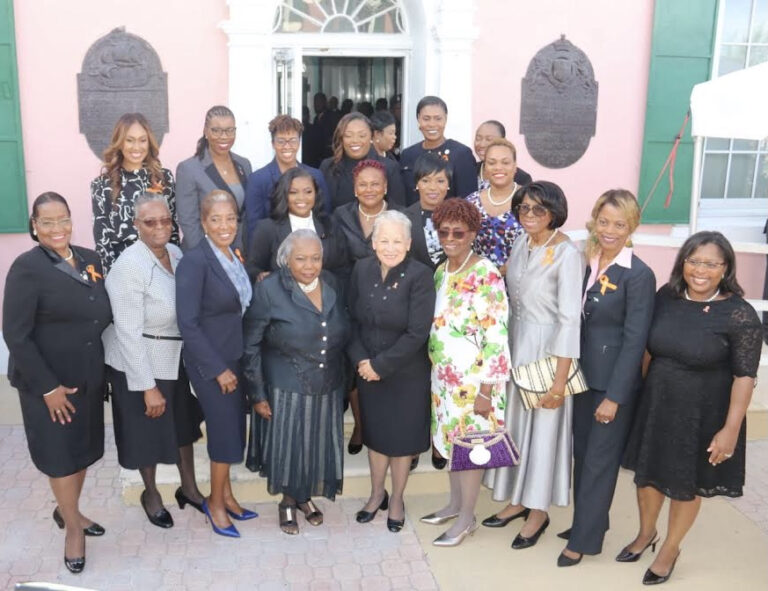 Women who have shaped the history of politics in The Bahamas gathered at Parliament on Wednesday to mark the 60th anniversary of women voting in The Bahamas, and to support the Orange the World campaign to end gender-based violence.

NASSAU, BAHAMAS — The Orange the World Campaign in the Bahamas touched the House of Assembly yesterday as Members of Parliament and the Senate were pinned with orange bows by members of the Zonta Club.

Each year, members of Zonta participate in a global campaign to end gender-based violence. The Orange the World Campaign is meant to be highly visible and invoke thought and action toward improving human relations and making the world a better place.

The Orange the World campaign coincides with the “16 Days of Activism to End Violence Against Women and Girls” which begins on November 25 and ends on December 10.

November 25 is the International Day for the Elimination of Violence against Women, and December 10 is International Human Rights Day.

This year, the Orange the World Campaign at the House of Assembly was particularly historic. In addition to sitting members of Parliament and Senators, women who have shaped history in The Bahamas as politicians were also present.

They were there to commemorate the upcoming 60th anniversary of women voting in The Bahamas, which is on November 26. On Sunday, November 27 from 3pm to 5.30pm Zonta will host a Boys to Men Seminar at Stephen Dillet Primary School.

Gender-Based violence refers to harmful acts directed at an individual based on their gender. It is rooted in gender inequality, the abuse of power, and harmful norms.

Gender-based violence (GBV) is a serious violation of human rights and a life-threatening health and protection issue. For more information, visit the Zonta Club of New Providence on Facebook, or email zontaclubnewprovidence@gmail.com.