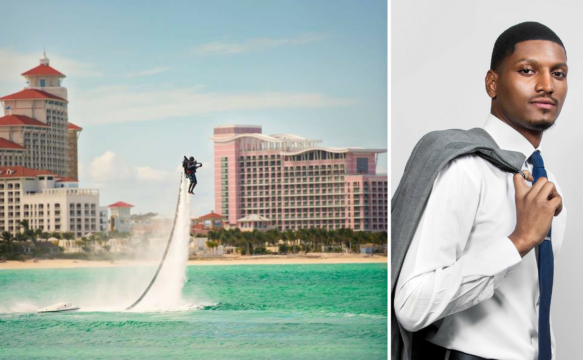 A years long legal battle against the government has ended favorably for one young Bahamian entrepreneur as the Supreme Court ruled that he be issued a license.

In an exclusive interview with Eyewitness News last week at the Melia Hotel, Jetlink Adventures Bahamas Founder and Chief Executive Officer Lincoln Deal opened up about his challenges in gaining approval for his business license.

Deal said the idea, which he began pursuing in 2013, resulted in two and a half years of constant ‘no’s before he saw the light at the end of the tunnel.

“In 2013, I ventured on this idea and was rejected a license on seven different occasions and rejected financing seventeen times by private investors and two financial institutions – the Bahamas Development Bank (BDB) and Scotia Bank,” Deal told Eyewitness News.

“…I eventually had to go to the Supreme Court to get my license.  So, it was Lincoln Deal and Jetlink Adventures against the Ministry of Transport and Aviation, the Attorney General’s Office and the Port Authority.”

“I remember walking into government agencies, being thrown out of the room and being escorted off the property (in one instance) by defense force officers,” Deal recalled.

He said he feels prejudice had much to do with the resistance he experienced.

He emphasized that while trying to pursue his very venture, he was constantly told, “no, it cannot happen”,  “there is nothing you can do, just give up”.

Nonetheless, Deal said, he remained tenacious and never gave up, even though he claimed he was told by a government official  to “let someone else take the face of my idea”.

Additionally, Deal said, he worked arduously for months on end to ensure he had all the necessary paperwork the various government departments required.

However, he claimed, the Port Authority and the Ministry of Transport and Aviation gave the most push back telling him that his idea would not be possible.

“When I got to the Port Department, the issues started coming,” Deal shared.

“First of all, they said ‘no it couldn’t happen because it was too new’.  I had to go back and provide more research to show where it (Jet Pack) was happening in different parts of the Caribbean and the safety record was impeccable,” he said.

Furthermore, to prove his operation was in line with safety regulations, Deal said, “I got US Coast Guard endorsements.  Basically, I supplemented my proposal showing them the safety precautions and showing where this can work instead of this can’t work.”

After conducting his due diligence, Deal said he was still told no.  It was then he said, that he approached a lawyer.

In response to Deal, former Minister of Transport and Aviation Glenys Hanna-Martin explained to Eyewitness News, that her ministry needed to ensure regulations were in place in the water sport industry, before allowing the introduction of a new water feature product for Bahamians and tourists.

“First off, he was introducing a new product that was not in the range of products that were available,” Hanna-Martin insisted.

“We had an issue with man power and, there was also a question about what regulations covered this type of product, because it went up in the air and came back down.

“Prior to that we had the banana boat and jet ski which were regulated, but we did not have any regulations to cover this.”

Further, Hanna-Martin explained, that it was during a time when her ministry was seeking to introduce new regulations to cover it but there were still concerns.

“We were also advised that this type of product had a number of concerns. It was a fairly new product in the market globally, and there were also environmental concerns and just concerns about the product itself; especially in areas where you have concentrated water sports.

“So, based on that, there was a decision made that because it did not fall within the regulations, it was advised that we not license it.”

Additionally, she said, Deal was interested in occupying the same water space (and essentially airspace) as the jet ski operators.

“We were taking a more conservative safety approach and just wanted to ensure safety. In addition, from an international standpoint, we also wanted to adhere to all safety regulations,” she said.

He expressed interest in Junkanoo Beach, and at that time, the Ministry of Tourism did not approve it because of cruise ships coming into that area.

Ultimately Hanna-Martin said, “we found a spot for him and he resisted us on that. He wanted to go where he wanted to go.”

Needless to say, Deal ultimately won the Supreme Court Case against the Ministry of Transport and Aviation and the Port Authority, which subsequently resulted in his business license being approved.

He described the entire process he endured as “humbling” and said that it “taught me to trust the process.  I took more rejections than wins.

“My entrepreneurial journey was very tough for lack of a better word.…”