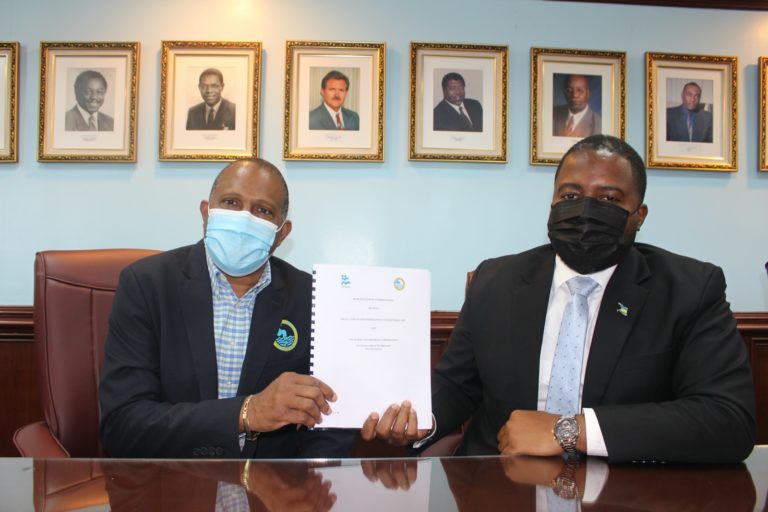 The Water and Sewerage Corporation signs a memorandum of understanding with Israel-based non-governmental organization IsraAID for a Sustainable Groundwater Management Project (SGMP) on Abaco. (BIS PHOTO)

Similar project being implemented on GB

NASSAU, BAHAMAS — The Water and Sewerage Corporation (WSC) recently signed a memorandum of understanding (MOU) with IsraAID for the development and implementation of a Sustainable Groundwater Management Project (SGMP) on Abaco following the passage of Hurricane Dorian in 2019.

IsraAID is an Israel-based non-governmental organization founded in 2001. Since its inception, it has worked in over 50 countries, providing post-disaster assistance utilizing an extensive roster of Israeli and international experts.

During this project, IsraAID will be working closely with WSC personnel to develop and implement a groundwater management system for Abaco, utilizing a series of monitor wells equipped with sensors to provide data to a central Microsoft Access database that will guide WSC’s management of the Abaco aquifer system.

The project commenced in December 2020 and is expected to be completed by late 2021. WSC has identified staff from Abaco, New Providence, Andros and other islands to participate in this project with the view of expanding the project to other islands, utilizing the skills and technology acquired.

A similar project is being implemented on Grand Bahama involving the Grand Bahama Utility Company (GBUC) and IsraAID.

The long-term goal is to ensure that the country’s natural resources, in this case groundwater, are properly and sustainably managed now and into the future for the benefit of all Bahamians and visitors to our shores.