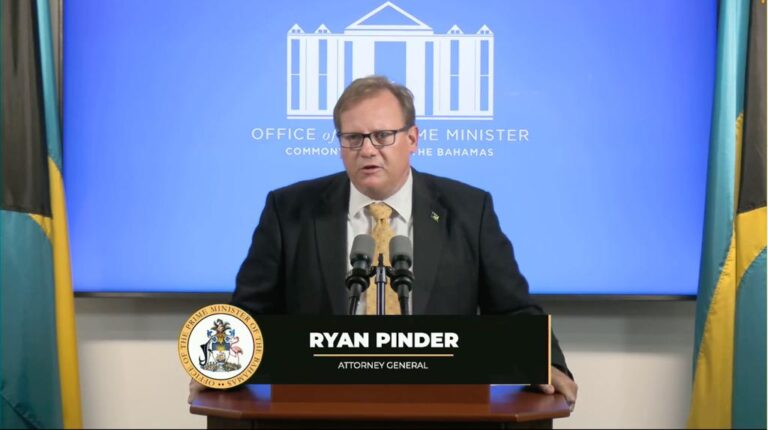 NASSAU, BAHAMAS — Attorney General Ryan Pinder said the Davis administration will not hold a referendum to decide whether it should equalise access to citizenship because referendums often produce the wrong result.

He was speaking to reporters during a briefing at the Office of the Prime Minister yesterday.

He confirmed that the administration will amend the Bahamas Nationality Act to equalise citizenship access for men and women.

“Look at what happens in referendums,” he said when asked about referendums. “A lot of time the right thing doesn’t get done. We are about governing for the right thing. We will do it and do what is correct. And the judgment in this instance is that in this we go by legislation. And that’s just my opinion. I have detractors in that opinion and I have people with contrary opinions. That’s fine too. Everybody is entitled to their opinion but that is the opinion and my recommendation to the prime minister.”

Although Pinder has previously said the administration will bring the bill to deal with the issue this summer, he did not say yesterday when that bill will be brought to Parliament.

Prime Minister Philip Davis suggested recently that equalizing access to citizenship for men and women is not a priority for the administration at the moment.

He said stabilizing the finances and bringing relief to people are more important at the moment.

“I will not raise my expectations for the end of the year,” Pinder said.

“Those things are under review. They are not a priority right now. The priority for me is to relieve the suffering and mental anguish to what our people are going through right now,” he said.

In 2016, a referendum on Bahamians’ ability to pass their citizenship to children and spouses was overwhelmingly rejected by voters, as was the case in a similar exercise in 2002.

Former prime ministers Hubert Ingraham and Perry Christie have thrown their support around the Davis administration changing citizenship rules through ordinary legislation. Their successor, Dr Hubert Minnis, promised to do the same thing in 2017 but never fulfilled that pledge.