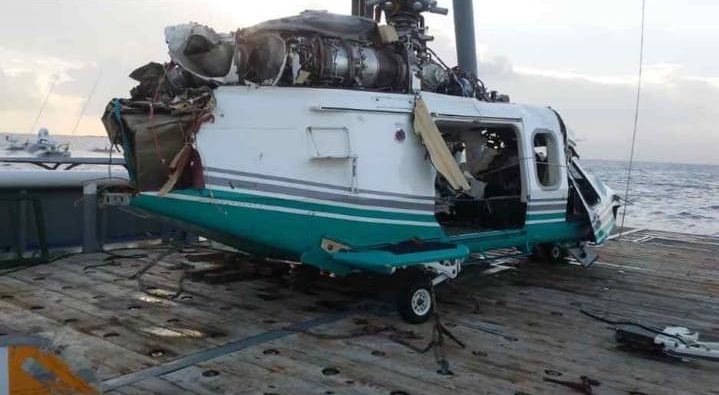 NASSAU, BAHAMAS – The wreckage of the 15-seater Agusta SPA helicopter that crashed in waters off Big Grand Cay, Abaco last Thursday, which killed all seven passengers onboard, was recovered from waters on Saturday and sent to Fort Lauderdale, Florida for further inspection and investigation.

An official of the Air Accident and Investigation Department (AAID) also confirmed last night that the helicopter’s Blackbox was located and it will be shipped to a recorder’s lab in Washington, DC for analysis, and to determine if there is any information to indicate what may have led to last Thursday’s crash.

“The wreckage was all recovered yesterday and we started mapping out the area on Friday, ensuring that we had the debris field identified,” Air Accident and Investigation Department Chief Investigator Delvin Major told Eyewitness News Online last night.

“Yesterday was when they started actually bringing everything up, once the area was mapped to find where everything was located.

“Then there was the process of bringing every piece [of debris] up to the surface and it was placed on a barge.

“The barge left the site about 10p.m. last night [Saturday] and it should have arrived at 4:30 this afternoon [Sunday].”

Major said he is expected to depart the capital today for Florida, where he will meet with a team of professionals to analyze each piece of the wreckage.

“We will take the wreckage to a facility where we will lay it out and document items to verify that we got all of the aircraft from the ocean. Then we will have some other experts and some manufacturers of the aircraft’s engines come in. They are also meeting us there [in Florida], so each entity will be looking and documenting to make sure that their product is there,” Major explained.

“Once it is all confirmed that everything is there, then the next step is to zero down on what could have possibly caused it [the crash] and when that happens, those components that may be suspect will be gathered and sent to another facility under more controlled circumstances where it can be further analyzed and tested.”

In an earlier interview with Eyewitness News Online shortly after last week’s crash, Major confirmed that the helicopter was registered in the United States and its engines were manufactured in Canada. He said both U.S. authorities and Canadian authorities were notified of the crash and the National Transportation Safety Board (NTSB) had also committed to lending its assistance to the investigation.

Local police on Saturday officially identified the seven persons who were killed in last week’s helicopter crash as:

Authorities said the aircraft was reported missing to the Royal Bahamas Police Force at about 2:53p.m. last Thursday, after it did not arrive at the intended destination.

“Police officers and residents of Grand Cay, later discovered the aircraft overturned in 16 ft. of water, off Grand Cay. The bodies of four females and three males were retrieved from the aircraft,” the RBPF said. “The Department of Civil Aviation, the Royal Bahamas Police and Defence Force are leading the investigation into the aircraft crash and will provide updates as needed.”

Last night, Major, the AAID Chief Investigator said the exact cause of the crash will not be determined anytime soon.

“We would not know that for some time until we establish, through further analysis, if something in the machine may have gone wrong, but in the meantime, we are also looking at the role the pilot played as far as his training, his familiarity with the area, his familiarity with flying at night,” Major said.

“We have sent requests to the Met Office for the weather report and to Air Traffic Control for tracking information, so it is a lot of players that come together and once we have gotten all of that information, we would sit down and start analyzing what we were are able to gather from all the information.”

Meanwhile, one the victims on the ill-fated helicopter was billionaire tycoon Christopher Cline, who died one day before his 61st birthday.

Cline was estimated to be worth $1.8 billion at the time of his death, according to Forbes.

According to the Sun-Sentinel, Cline began toiling in the mines of southern West Virginia at a young age, rising through the ranks of his father’s company quickly before forming his own energy development business, the Cline Group, which grew into one of the country’s top coal producers.He went on to amass a fortune and became a major Republican donor.

Clarke, Searson and Wykle, other passengers on the ill-fated helicopter, were said to be friends of Cline’s daughter, Kameron Nicole Cline, who also perished in last week’s crash.

Clark, Searson and Kameron Cline recently graduated from Louisiana State University. The trio were sorority sisters and were members of Phi Mu sorority.  The girls were reportedly joined on the fourth of July trip by Wykle, who attended West Virginia University.

Last night, Major said he had been in contact over the weekend with family members of the victims who are now in the Bahamas to identify and claim their loved ones.