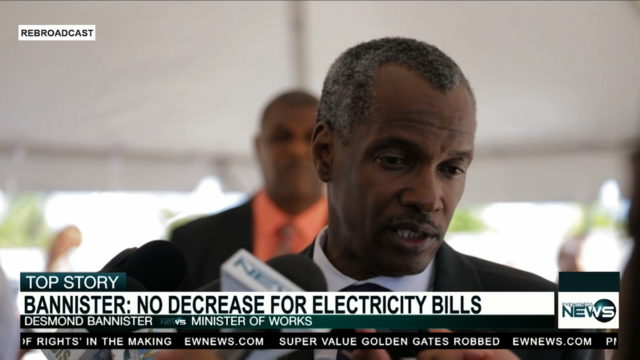 On the heels of the revelation that Bahamas Power and Light (BPL) consumers’ bills have increased by an estimated 70 per cent, Minister of Public Works Desmond Bannister said he remains optimistic about the company’s plans for improved power generation in New Providence.

“I am really, really pleased with what I am seeing,” Bannister noted on Monday.

While the company grapples with finding ways to lower the cost of power generation in New Providence, Bannister said the company is making improvements in other areas to ensure that consumers are receiving value for their monies spent.

“Notwithstanding the increase in oil on the world market, you will see tremendous improvements that have been made at BPL,” he noted.

“We have signed the Memorandum of Understanding (MoU) with Shell and we are on the way to seeing some tremendous improvements in this country from BPL.”

BPL announced last week Friday that it signed the MoU with Shell and boasted that the agreement is the first step in transitioning the electrical generation company into a modern utility with a focus on providing stable, low-cost power.

Bannister revealed that BPL executives will soon share what the company is doing to offer consumers value for their money until there is a marked decrease in electricity bills.

Bannister, while addressing members of the media, underscored the main reason why bills have increased and why consumers won’t see a reduction anytime soon.

“We are a very small market and if you look at the price of oil on the international market over the year, from last year to now, you will see how much it has risen and you will see the intangibles that impact BPL and what we are trying to do,” he said.

“BPL has a number of interim solutions that the company has already started to put in place,” Bannister noted. “I am sure that he [Dr. Moxey], will go into great depth to explain them to the Bahamian people.”

While Dr. Moxey is expected to soon reveal BPL’s extensive interim plan, he gave media a brief snapshot of what sort of relief consumers can look forward to in the months ahead.

“Our next steps will be strategic and deliberate,” Dr. Moxey noted. “We will focus on debt reduction, customer service…and multiple ways to facilitate bill payment for our customers.”

Dr. Moxey revealed to Eyewitness News Friday that BPL consumers will not see a marked decrease in their electricity bills until summer 2019.

What I don’t get is this: If BPL suffers loss to its generation capacity through no fault of the consumer, why is that cost or any cost associated with such a matter passed on to us, the consumers? Does BPL not have insurance for just these unfortunate inevitabilities? How are these circumstances the consumers’ fault, and why should we have to bear the unreasonable burdens associated with BPL’s mechanical woes? Why are we being made to pay for what insurers should be taking care of? Is BPL not mandated by law to carry insurance coverage for its machineries and operations?