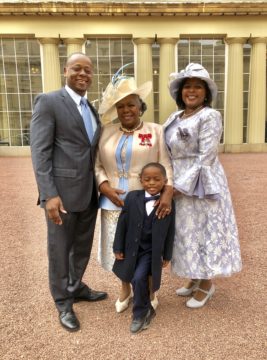 From left, Brent Dean, son-in-law; Dame Janet Bostwick; Victor Dean, grandson; and Lisa Bostwick-Dean, daughter, at Buckingham Palace on Thursday, March 28, 2019, after an investiture at which Dame Janet was named Dame Commander of the Most Excellent Order of the British Empire.

NASSAU, BAHAMAS – The Women’s Association of the National Congress of Trade Unions of The Bahamas (NCTUB) on Thursday congratulated Dame Janet G. Bostwick, DBE, on her recent investiture at Buckingham Palace.

Dame Bostwick, a former Trade Unionist was recently honoured by the Association at their ‘I AMWOMAN’ 2019 Award Ceremony held in celebration of International Women’s Day.

Sharon Martin, president of the Women’s Association said that it is the role of the Association to support women’s advancement and openly celebrate their achievement; therefore,Dame Bostwick was singled out not only for her political achievements but also her service to the Trade Union Movement. Dame Bostwick served as the first female Secretary General of The Bahamas Public Services Union, and tirelessly asserts that “once a Unionist, always a Unionist”.

Evans further stated that it is noteworthy that she continues to champion the cause of women, especially young girls.