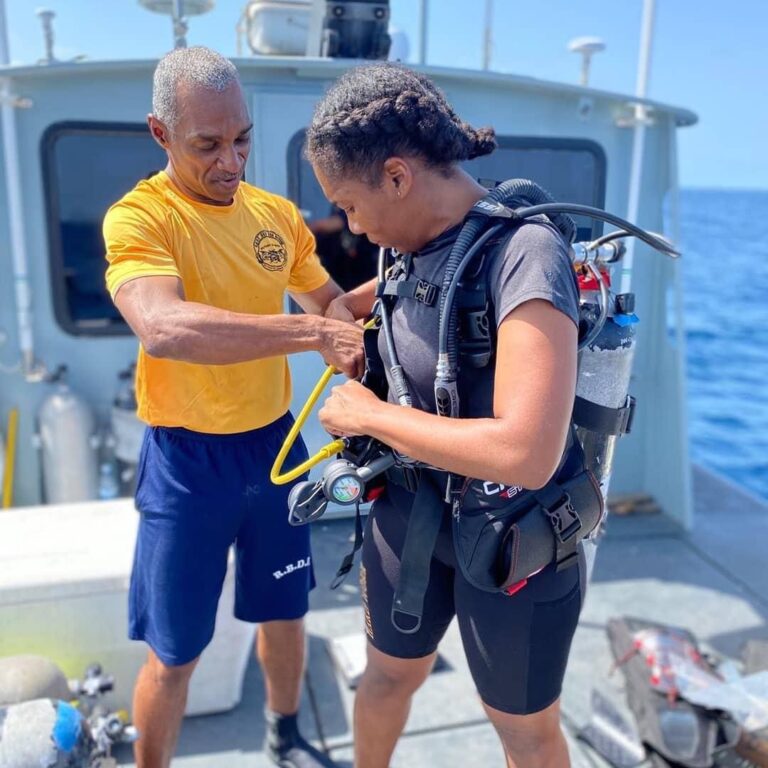 NASSAU, BAHAMAS — Leading Woman Marine Opal Farquharson can be found rappelling down a three-story building and climbing a 40-foot rope. She’s not a GI Jean but rather a qualified combat diver within the Royal Bahamas Defence Force (RBDF).

Early on in her career, Farquharson learned how to push herself and overcome challenges. This ever-enduring spirit has aided her in achieving her goals.

Her advice for women entering a male-dominated profession: “It is important to get involved and not sit on the sidelines, allowing the men to overshadow or overpower you as a female.

“Always try to be on the same par in terms of executing your duties. Nevertheless, there are some natural physical attributes the men have that some women may not naturally possess. However, this should not keep a female from leveling out in her career path regarding equality in the workplace.

“Opportunities must be given to both genders to succeed equally in their career paths.”

In leading men, Farquharson stated that she has experienced resistance. However, she has recognized that it is not her, but more of a cultural and social aspect of society. She has found that to get a better response from her male counterparts, the tone of her voice is important.

She realized that to get the reaction she wants, her tone has to be different.

“I can’t be barking. I am affirmative, not aggressive with them. I guess when the men get to know the individual, things get a little easier and we work together better,” she said.

As a female diver, Farquharson knew there would be barriers and hurdles to overcome while achieving her goals.

When asked to describe the perfect working environment, she stated: “Out to sea.”

She said being at sea, away from the hustle and bustle of HMBS Coral Harbour and Nassau, can be serene, where being a part of a boat crew is like working with a family. According to Farquharson, one experiences the opportunity to see the islands that make up the archipelago of The Bahamas. No one day is alike, and it is likened to an adventure.

Farquharson said she looks forward to the day when more women will explore the diving field. As part of the Commando Squadron unit, it was mandatory that she completed the combat swimmer’s course. Today, the course is on a voluntary basis.

Also, she plans to further her diving career as a member of the RBDF Dive Team. Among her accomplishments are combat diver, PADI diver, rescue diver, combat swimmer and advanced diver. She has completed the Close Quarter Battle course and is a tan belt in martial arts. She plans to encourage future female divers to be more active in the dive department.