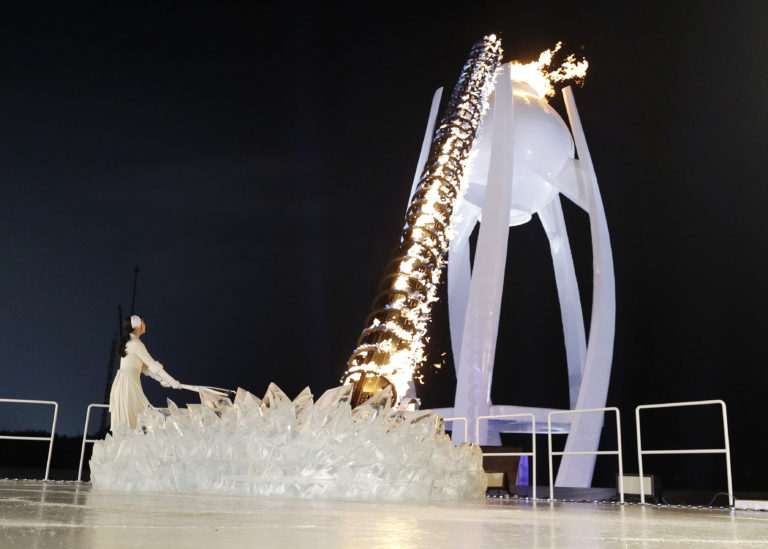 PYEONGCHANG, South Korea (AP) — In an extraordinary show of unexpected unity, North and South Korea sat side by side Friday night under exploding fireworks that represented peace, not destruction, as the 2018 Winter Olympics opened on a Korean Peninsula riven by generations of anger, suspicion and bloodshed.

The sister of North Korea’s leader, Kim Jong Un, shook hands with South Korean President Moon Jae-in — and appeared genuinely pleased — while they watched an elaborate show of light, sound and human performance. Minutes later came a moment stunning in its optics and its implications: the United States, represented by Vice President Mike Pence, sitting a row ahead of Kim’s sister, Kim Yo Jong, and the North’s nominal head of state, all watching the games begin — officials from two nations that many worry have been on the brink of nuclear conflict.

Not long after, North and South Korean athletes entered Olympic Stadium together, waving flags showing a unified Korea — the long-time dream, in theory at least, of many Koreans both North and South. It was the rivals’ first joint Olympic march since 2007. International Olympic Committee President Thomas Bach then handed the podium to Moon, who declared the Olympics officially open.

The ceremony’s signature moment delivered another flash of unity and deft political stage-managing, too. Two athletes from the joint Koreas women’s hockey team climbed stairs to the cauldron with the Olympic torch. At the last moment, though, they handed off the flame to former Olympic champion figure skater Yuna Kim, arguably South Korea’s most famous person.

She actually lit the cauldron as the home crowd roared.

Moon, in a statement, said athletes from North and South will “work together for victory.” And Bach lauded the joint march of the two Koreas as a “powerful message.”

“We are all touched by this wonderful gesture. We all join and support you in your message of peace,” Bach said.

After years of frustration, billions of dollars and a nagging national debate about their worth, the opening ceremonies took place before a world watching the moment not only for its athletic significance and global spectacle, but for clues about what the peninsula’s political future could hold.

There is a palpable excitement in this isolated, rugged mountain town, as one of the poorest, coldest and most disgruntled parts of an otherwise prosperous South Korea kicks off two weeks of winter sports, spectacle and, from the looks of things, some inter-Korean reconciliation.

After a chaotic year of nuclear war threats and nuclear and missile tests from the North, the opening ceremony proved to be an evening of striking visual moments.

The significance of Pence and the North Koreans sitting in the same box was not immediately clear, though it seemed to run counter to the mission he was supposed to undertake. He’d been dispatched from Washington for the Olympics in part, he said, to make sure the world didn’t forget that North Korea was a misbehaving and dangerous neighbor in the community of nations.

What did seem clear was that, deliberately or not, the North Korean government had managed to edge its way onto center stage during the South’s biggest global moment in years.

A huge crowd gathered in the freezing Olympics Stadium as performances displayed the sweep of Korean history and culture. The march of athletes from the world’s many nations saw them girded against a frigid Korean night with temperatures that dipped below freezing and biting winds.

Members of a delegation from North Korea, part of an Olympics partnership between the two Korean rivals, watched from high in the stadium a performance called “The Land of Peace” and as past South Korean athletes paraded a large southern flag. The North Koreans, dressed in identical garb, cheered in careful coordination.

The North has sent nearly 500 people to the Pyeongchang Games including officials, athletes, artists and cheerleaders after the Koreas agreed to a series of conciliatory gestures to mark the games. More than 2,900 athletes from 92 countries will compete here, making it the biggest Winter Olympics to date.

After two failed Olympic bids that emphasized the high-sounding notion that the games could help make peace with North Korea, Pyeongchang finally sold its successful try in 2011 on the decidedly capitalistic goal of boosting winter sports tourism in Asia.

But North Korea has a habit of not letting itself be ignored when it comes to its southern rival.
Its agents blew up a South Korean airliner ahead of the 1988 Seoul Olympics in an attempt to dissuade visitors; then it boycotted its rival’s Olympic debut on the world stage. A few years later, the discovery of the huge progress Pyongyang had been surreptitiously making on its nuclear programs plunged the Korean Peninsula into crisis. It has only deepened over the years as the North closes in on the ability to field an arsenal of nukes that can hit U.S. cities.

And so, with a little help from a liberal South Korean president eager to engage Pyongyang, the 2018 Pyeongchang Games open.

They do so with as much focus on the North, which has zero real medal contenders, as the South, which in the three decades since its last Olympics has built a solid winter program as it went from economic backwater and military dictatorship to Asia’s fourth-biggest economy and a bulwark of liberal democracy.

Could Pyeongchang’s initial pitch — that it could contribute to peace on the Korean Peninsula — actually become reality? The opening ceremony offered at least some hints about that, and maybe more. What’s certain is that these Games, more so than any in recent memory, are about far more than sports.
___
This article was written by FOSTER KLUG, Associated Press