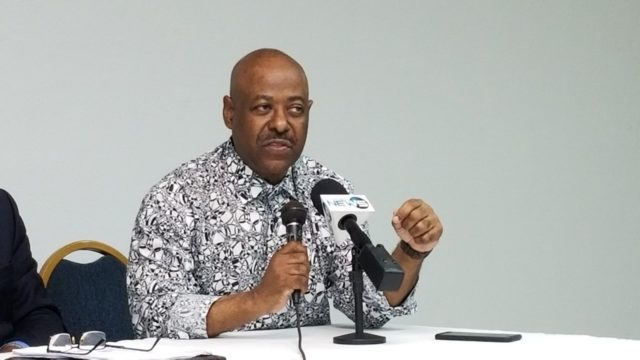 NASSAU, BAHAMAS — Former Minister of Tourism Obie Wilchcombe said he plans to seek a nomination from the Progressive Liberal Party (PLP) to run in the next general election for the West End and Bimini seat, a constituency he represented before losing his re-election bid in May 2017.

Of the defeat, he told Eyewitness News Online that he excepts the wishes of supporters and will move forward.

As it relates to the party rebranding itself to appeal to the electorate, Wilchcombe said it is important to get the PLP to re-focus on being a party of the common man.

He said it must also empower and lift up the Bahamian people.

“I think we have gotten to the trickle-down world that was perpetuated by the other side (Free National Movement),” Wilchcombe said.

Asked why he did not run for leader of the PLP at convention, Wilchcombe responded, “We have a party leader and I am not in the House of Assembly.”

“I think that the party should be led by the members in the House because they have direct access to Parliament every day and they are speaking to the issues on a daily basis from Parliament,” he said.

Wilchcombe ran for deputy leader in 2009 and lost to Davis, who became leader of the party after former Prime Minister Perry Christie resigned after the last general election.

The PLP was crushed at the polls in the 2017 election, capturing four seats in the House to the FNM’s 35.