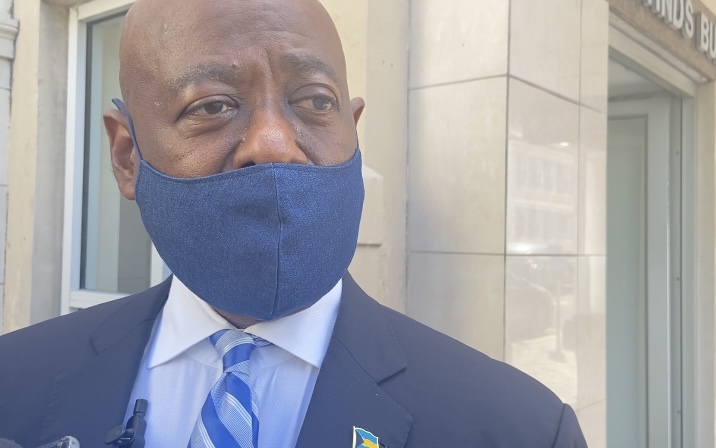 Minister of Social Services Obie Wilchcombe speaks to reporters outside of Cabinet on Tuesday.

Social services card will be reintroduced

The National Food Distribution Task Force was established last year in response to concerns of access to food across The Bahamas in the early phases of the COVID-19 pandemic and officially came to an end this month after a $54 million investment.

The task force’s chairwoman Susan Larson has said that some 18,000 households were still benefiting and depending on the most recent phase of the food assistance program and will have to be absorbed by the Department of Social Services.

Speaking to reporters outside Cabinet on the way forward regarding those people who will no longer be able to access the program, Wilchcombe said: “We inherited about 4,000, I’m being told, but I expect that number to change.”

He noted that that number will be added to those individuals currently on social assistance at the ministry, adding that a systematic program will ensure nobody will be left out.

Wilchombe said part of that system will be the reintroduction of social services cards that will allow Bahamains to access services.

“It should have happened a long time ago. The dignity of people must be returned…The cards will be a return to dignity.”

Asked how the ministry will take on the load given its current challenges, the social services minister said: “We have to cut some costs some places. We’ve discovered where we’re renting buildings that we are not even in, in social services…from 2018. Facilities that are costing millions of dollars and we’re not even in the building.”

Wilchcombe underscored that the ministry will be cutting costs in order to “deliver services”.

In a Letter to the Editor to The Tribune on Monday, Larson defended the program after Wilchcombe questioned the nearly $800,000 weekly bill and insisted that NGOs do not deserve  “politically motivated sideswiped”.

But the minister maintained that “it was a large amount of money spending and I believe that more people could be satisfied with that amount of money”.

He said: “I think whatever they did at the time was not in my view fully discussed to the extent that we were delivering what the Bahamian people really required and did you have to spend that much, or could you consider anoteh approach to it.”

Wilchcombe added: “In moments of desperation, in the momets of trying to find a plan they came up with that plan.”

At the peak of the pandemic in 2020, about 57,000 households had registered for assistance.