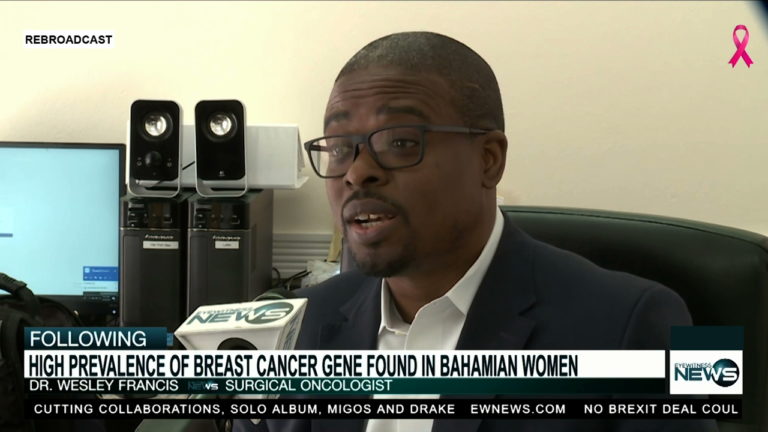 It’s a serious issue that’s affecting many Bahamian women and even some of our men: Breast Cancer.

October is recognized as breast cancer awareness month, and many women have been sharing their stories of mastectomies, chemotherapy, radiation and other adjuvant treatment, but the main question is why?

Why are so many Bahamian women being diagnosed with Breast Cancer?

These BRCA1 and BRCA2 genes belong to a class of genes known as tumour suppressors. When functioning normally, these genes help keep breast, ovarian, and other types of cells from growing and dividing too rapidly or in an uncontrolled way.

However, when certain changes or “mutations” in the BRCA genes occur, cells are more likely to divide and change rapidly, which can lead to breast or ovarian cancer.

Presently, research has found that The Bahamas has the highest known prevalence of BRCA mutations among breast cancer patients of any country.

What’s more, 23 per cent of women with breast cancer in The Bahamas were found to carry one of seven founder mutations in the BRCA1 or BRCA2 gene. And according to Dr. Francis, this percentage is relatively high.

“Because BRCA1 and BRAC2 genes are very high in our breast cancer population in The Bahamas, we are seeing a lot more patients with genetic breast cancers; therefore the age that they present [a breast cancer diagnosis] is much lower than with other populations.”

According to Dr. Francis, breast cancer is really a disease that affects older women. Most women in the United States, he said, are diagnosed at the age of 65 while Bahamian women are being diagnosed under the age of 40.

A definite reason why the BRCA1 and BRCA2 gene is so prevalent in The Bahamas is not known.

Dr. Francis surmised that it could be because the population of The Bahamas is so small.

“Our gene pool isn’t that wide and I believe that this is a factor,” he said “There could be some environmental factors too that we are not aware of, but do we have the real reason why? I can’t really say that we know the reason why.

“I think that we really need to do some more population studies before we could actually put forward a concrete reason as to why this is happening in our population. I think for now it’s just an observation, and we have to set policies and guidelines based on the observation.”

Dr. Francis said not all women who have been diagnosed with breast or ovarian cancer must be tested for the BRCA1 or BRCA2 genes.

He explained that there are specific guidelines before testing is carried out, which involves persons who are under the age of 50, persons whose breast cancer is triple negative, those with a family history of a person or persons with a positive BRCA test, and those persons with a male family member who has been diagnosed.

He noted, however, that there are women who do not have breast cancer, yet they are still tested for the gene because of a family history of the disease. If these women test positive for the BRCA1 gene, they have an 85 per cent chance of developing breast cancer and a risk of developing ovarian cancer. Such women, Dr. Francis said, must undergo closer surveillance such as mammography, an MRI to get a more “sensitive” screening test, as well as entertain the idea of getting what is called a “prophylactic mastectomy” or taking chemo prophylactic pills such as tamoxifen for a certain number of years.

“If you remove both breasts, you reduce the risk by 99 per cent,” Dr. Francis said.

The surgical oncologist said women must sit with their physician and do what is called a “risk assessment” before they are tested for the BRCA1 or BRCA2 gene, and they must also receive counselling.

“Once you get that information that you are BRCA1 or BRCA2 positive, it has certain implications for screening and even for treatment,” Dr. Francis stressed.

Meanwhile, carriers of this BRCA1 or BRCA2 gene mutation can now plan preventative strategies to ensure that they do not develop cancer. Cherise Saunders is one of these women.

Having been diagnosed with ovarian cancer in March 2015, Saunders said she was advised to get tested for the BRCA1 gene. Her results returned positive and Saunders decided to get a double mastectomy. Such a move would now give her a 99 per cent chance of not developing breast cancer.

“I struggled with getting a mastectomy for about two years,” Saunders said. “There were two other doctors that I saw – one at Cancer Treatment Center of Americas in Tulsa, Oklahoma and then I came back home and spoke to another doctor who referred me to Dr. Locksley Munroe,” Saunders explained.

The cancer survivor said following this meeting with Dr. Munroe, she decided to remove both of her breasts in October 2017 without reconstruction.

“Ovarian and breast cancer are linked, they are called sister cancers, so it is very likely that I would have developed breast cancer,” Saunders said, adding that she also had a strong family history of breast cancer, and there was no way that she would have risked developing another cancer and facing chemotherapy for a second time.

“I decided to just take them off. They are overrated anyway, so I said took them off,” Saunders joked.

The cancer survivor said following the surgery she was shocked to see that she had no breasts, but she had to tell herself that the move was to save her life.

“Now it is natural,”  Saunders said with a laugh. “I walk around sometimes without my prosthetics [false breasts] and the only thing I had to get used to was people looking at me strange when I did not have the prosthetic as yet.”

Saunders advised Bahamian women with breast or ovarian cancer to get tested for the BRCA1 and BRCA2 genes, especially if they have a strong family history of the disease.

“It’s proactive,” she advised. “You may not be like me and remove your breasts, but at least you will know that it is in your genes and you can do something about it.”

The only way to know if you have inherited the BRCA1 or BRCA2 gene mutation is to get genetic testing, and this is done locally by Dr. Wesley Francis.