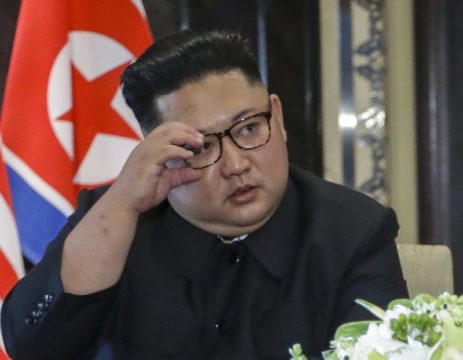 Commentaries critical of Tokyo, which has maintained a harder line toward Pyongyang than Seoul and Washington, have increased noticeably in recent weeks in a strategy aimed at driving a wedge between Japan and its allies.

Over the past few days, the North’s official media have chastised Japan for discriminating against its large ethnic Korean community and played up South Korean reports that protesters in Seoul threw eggs at the Japanese Embassy over Tokyo’s alleged attempts to take control over a disputed island that is a cause celebre for both North and South.

Pyongyang has also lambasted Japanese Foreign Minister Taro Kono for suggesting Japan could foot part of the bill for inspections to verify the North’s denuclearization process.

Japan ruled the Korean Peninsula as a colony from 1910 to 1945 and the history of animosity between the neighbors goes back centuries. Tokyo and Pyongyang have never had formal diplomatic ties.

But North Korea’s strategy of deliberately keeping Tokyo at arm’s length has been particularly apparent over the past several months, as Kim has held summits with China, South Korea and the United States. He is expected to hold a summit with Russian President Vladimir Putin in September.

“Japan is near to the Korean Peninsula. But Japan is a burglar that historically inflicted wars and misfortune and pain of colonial rule on Korea,” it said before getting to North Korea’s often repeated demand: “Japan should make a sincere apology and reparation for the past crimes.”

Because it is state-run, North Korea’s media offer a good barometer of Pyongyang’s political climate. Since earlier this year, they have significantly cut back on negative commentaries directed at U.S. President Donald Trump and South Korean President Moon Jae-in, presumably to avoid souring the North’s ongoing diplomatic outreach toward both countries.

It has, however, reserved the right to lash out at some of their negotiators or policies without slamming the leaders themselves.

Pyongyang’s game of hardball with Tokyo is calculated to play well in China and South Korea, which also harbor deep distrust toward Japan. Tokyo has clearly been relegated to a secondary role in the talks to persuade Kim to abandon his nuclear arsenal and bring his country more into the norms of the international community.

But while Prime Minister Shinzo Abe is also reportedly considering a one-on-one meeting with Kim, he has held surprisingly firm to a tough policy of maintaining economic and political pressure on the North. The Japanese leader could meet Kim at an eastern Russia development forum in Vladivostok in September, where Kim and Putin may hold their summit.

Public sentiment in Japan toward North Korea is generally negative. The North already has ballistic missiles that could be used to launch a conventional, biological or nuclear attack on Tokyo or other major cities, along with U.S. military bases throughout Japan where tens of thousands of American troops are deployed. Kim unilaterally announced a moratorium on long-range missile launches, pleasing Trump, but has pointedly said nothing about the mid-range missiles that concern Japan the most.

Abe is also committed to resolving a bitter dispute over more than a dozen Japanese citizens who were abducted by North Korean agents in the 1970s and ’80s. Pyongyang insists that issue has been resolved.

Tokyo claims the North has not been fully transparent about the fate of the abductees and whether any are still alive.

The biggest hurdle, however, could well be the reparations issue, which some experts believe could cost Japan billions of dollars.

North Korea has long demanded that Japan pay for the damage it caused during its often brutal colonial rule. Although Japan claims that matter was settled long ago, the shifting ties between Pyongyang, Seoul and Washington — and particularly efforts to formally declare an end to the 1950-53 Korean War — could put Tokyo under increased pressure to re-examine its own past or be left out in the cold.

This article was written by ERIC TALMADGE, Associated Press writer.