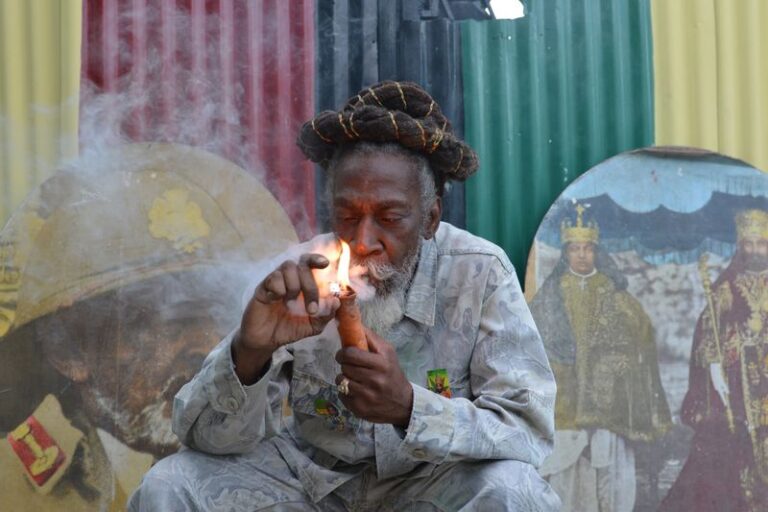 A Rastafarian smokes in this 2014 Associated Press photo.

NASSAU, BAHAMAS — The House of Rastafari (HOR) Inter-Mansion Collective yesterday reproached both major political parties for failing to include consideration of the Rastafarian community in their political manifestos where marijuana use is mentioned.

Ahead of the September 16 General Election, both the Free National Movement (FNM) and Progressive Liberal Party (PLP) have expressed support in favor of a medicinal cannabis industry.

In a statement, the House of Rastafari made note of this but also called for “reparatory justice” for the Rastafarians who they said have been criminalized for possession of marijuana, which is used as a sacramental herb in some religious practices.

“Both political parties’ manifestos include passing a medicinal marijuana bill but neither of the two political parties has mentioned how they will stop criminalizing Bahamian young men and Rastafari for utilizing the herb — marijuana/cannabis,” the statement read.

“There has been a lot of talk and fanfare over expunging criminal records, but where is the redress for those who have lost livelihood, education, family and much more? What will be given back to them?

“The Rastafari community in The Bahamas is calling out for reparatory justice. This is a call placed upon The Bahamas government by Bahamian people — Rastafari.

“The Rastafari community has been long-standing custodians of African pride and culture; raising black scholars, teachers, historians and artists. It is time that the government of The Bahamas recognize the Rastafari faith and the preservation and practice of African culture.”

The HOR yesterday demanded that the Rastafari community be empowered in the process of decriminalizing cannabis, particularly by being provided access to the multibillion-dollar international market.

It proposed that the community “can plant 100 acres of cannabis; process 1,000 pounds every two weeks; extract oils and produce capsules, edibles, tea bags; and build industries from the cannabis herb”, but asked: “Who will provide this type of empowerment when it comes to decriminalizing cannabis for the Rastafari community — Bahamian people?”

Its statement asserted: “This is your chance to define a new version of normal; a rare and truly sacred opportunity to initiate national development. The time to act on behalf of the people is now.”

Rayne Morgan is a digital and broadcast copy editor at Eyewitness News. Contact: rmorgan@ewnews.com View all posts by Rayne Morgan →