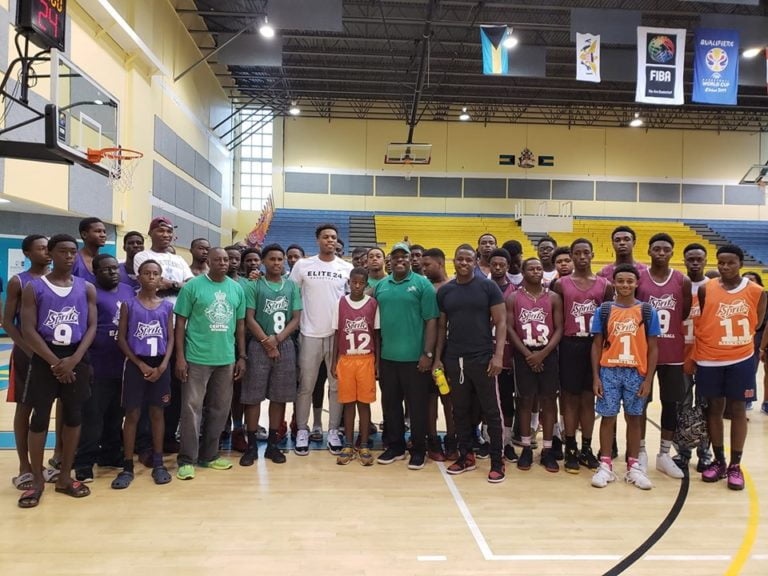 After several weeks of competition, the Western & Eastern Division Teams will face off for the title of Sprite Basketball Champions on July 26 at the Kendal G. Isaacs Gymnasium. The Championship game will be open to the public and will feature food and giveaways as well as performances by Tonash and the Urban Renewal Marching Band and a Slam Dunk competition.

The Sprite Basketball Tournament, which kicked off on July 1 at the Carmichael Road Police Station, celebrates its 11th anniversary this year. The Caribbean Bottling Company (CBC) and the Royal Bahamas Police Force once again teamed up for the annual event, which included nine-district teams competing for the coveted title of Sprite Basketball Champions.

Each summer, for the past eleven years, CBC has funded the Sprite Basketball Tournament, as well as providing all materials for the players and coaches. CBC also provides prizes and giveaways for players, while keeping all participants hydrated with Sprite, Dasani water and Powerade.

“Sprite Basketball is always an exciting experience and each year we are impressed by the sportsmanship, excitement, and level of athleticism displayed by the young men who take part” noted Nikia Wells, CBC Communications Marketing Manager. “The Sprite Basketball tournament was created by CBC as a way to offer support to the various communities, around New Providence, that we serve. We found a unique way to bring together young men, from a number of different community districts, for a fun, engaging event. Over the years, Sprite Basketball has truly created a positive environment for these young players. Not only have they bonded as friends, but they have also built strong relationships with the police officers who coach and mentor them.”

“The Sprite Basketball Tournament has become a highlight of the youth programs that the force is involved in” noted ASP Johnson, of the Royal Bahamas Police Force. Johnson, who is also the coordinator of the program, added, “Over the past 10 years plus, the Sprite Basketball Tournament has not only allowed us, as the police body, to pass on valuable team building and professional skills to young men, but it also helps us to foster relationships with these young men, which is invaluable. Without CBC’s continued support in organizing and financing this program, none of this would be possible.”

The Band Camp won the 2018 Sprite Basketball Tournament with a score of 98-78 against the Southwestern Division team. Demargio Taylor was named the tournament’s Most Valuable Player, Mark Sawyer was the Spirit Award winner, and Nathan Sullivan, from the Northeastern Division, won the Slam Dunk competition.

The Caribbean Bottling Company and Sprite also sponsored several other summer programs as part of its Sprite Summer of Basketball, including Peace In Da Streets, the Buddy Hield Basketball Summer Program, the Kevin Johnson Basketball Summer Camp, and Hooping By The Park, which was founded by Sprite Basketball Tournament alum – Jabari Wilmott.

On July 22, the Sprite Basketball Tournament players got to meet NBA player, Buddy Hield, during his 24 Elite Summer Camp, which is also proudly sponsored by Sprite. He encouraged the budding athletes to go after their dreams, to stay focused, train hard, and challenged them to never give up.