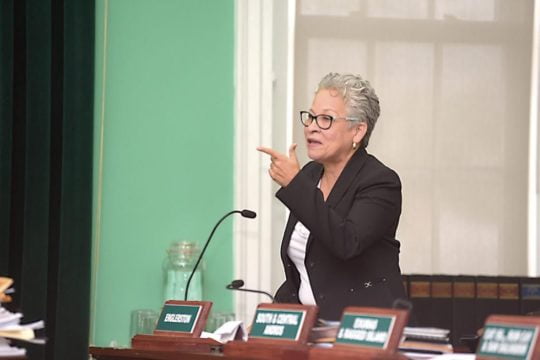 The former Transport minister insisted this “egregious” mistake failed to get aid to the island sooner, during the debate on the disaster preparedness bill.

A shouting match erupted between the Englerston MP and West End and Bimini MP Pakeisha Parker Edgecombe over the claim, with Parker-Edgecombe standing on a Point of Order to demand Hanna-Martin substantiate her claim.

“To our knowledge and from what we were made aware of by Civil Aviation, the West End airport was opened when the all clear was given, which allowed for numerous airplanes to come in and assist with hurricane relief efforts,” Parker-Edgecombe said.

Parker-Edgecombe then urged Hanna-Martin to provide evidence of the length of time the airport had been inoperable and produce the source of her information.

But Hanna-Martin maintained she was certain the airport remained closed for “many hours”, noting that the airport “fell through the cracks and it’s unfortunate”.

This ballooned into a back and forth between the two, with House Speaker Halson Moultrie adding to the fray attempting to gain the floor.

When he finally did, Moultrie cited the rules of a ‘Point of Order’ and asked Englerston to substantiate her claims.

“I was informed by the minister [of aviation] that it was not being opened,” she replied.

“I’m speaking my own personal experience, and it was many hours after the all clear was given by the Department of Meteorology”.

She then furthered that it was in excess of 10 to 12 hours before aid was able to be received at the West End airport.

Throughout the remainder of her contribution, Hanna-Martin criticized the government’s response efforts in the aftermath of the deadly Category 5 storm and reiterated her opposition to the bill.

The Disaster Preparedness and Response (Amendment) Bill, 201, would give the prime minister powers to make orders that would provide for mandatory evacuations, curfews, and restriction of movement in certain areas for a period of time.

If passed, the bill would provide for orders declaring relief from the disaster, including a rebate of business license fees, waiver of value added tax, exemptions from excise tax or tariff tax, and waiver of any other fee, levy or tax payable under any law.