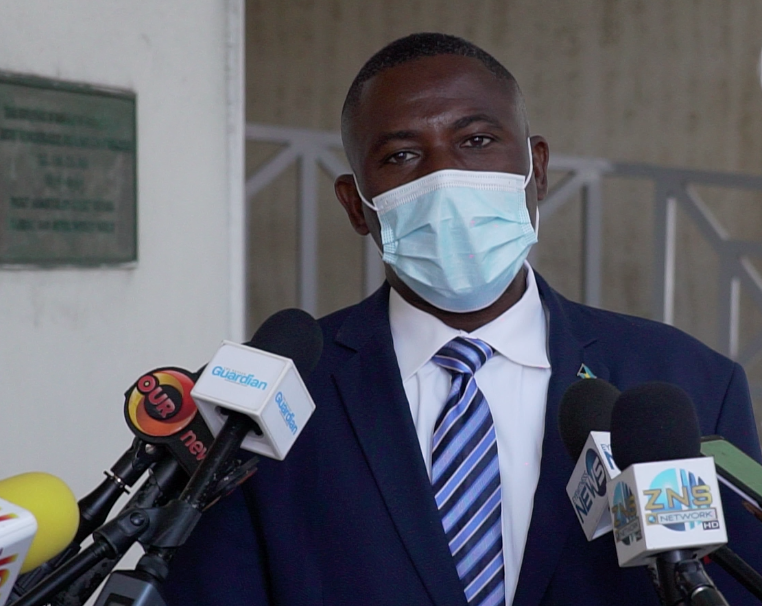 Minister of Health Renward Wells speaks with the media ahead of a Cabinet meeting on Tuesday, December 15, 2020. (FILE PHOTO)

NASSAU, BAHAMAS – Minister of Health Renward Wells said while there is an expectation for the new COVID variant to eventually touch every part of the globe, given its highly contagious nature, it is hoped the existing border control measures in place in The Bahamas will “slow down and restrict the appearance” of the new strain in the nation.

“So, we aware of the virus, as everybody is globally, the new strain, but we have mitigating measures in place that we had in place previously to the identification of this new strain,” he told reporters outside the Churchill Building.

“So, we’re hoping that the new health measures that we do have in place enforced now for our borders will [be] able to slow down and restrict the appearance of this new strain in The Bahamas.

“But, you know, just like COVID-19, we had done some things in shutting down our borders and closing out certain countries, and the virus ending up here. It is a pandemic and more than likely that strain may, as time goes on, eventually end up probably throughout the globe.

“Our saving grace and our hope is that the vaccine will work against this strain as it does against other forms of COVID-19. So, we’re looking at the results and we’re staying aware and doing all that we can to continue to ensure that we protect the health and well-being of the Bahamian people.”

The COVID variant seen in the United Kingdom in September 2020 has been recorded in Colorado, California and Florida.

While substantially more contagious, there is no evidence to suggest it is more deadly or that the existing vaccines will be less effective against it.

As a result of the surge of the strain in England, UK Prime Minister Boris Johnson introduced new lockdown measures this week.

He said UK citizens should not be traveling.

With the exception of four, European Union countries have placed travel restrictions on the UK.

Jamaica, which has more relaxed entry measures than The Bahamas, has issued a ban on flights coming from the UK until January 4, and later extended the measures until 31.

The Bahamas will not have direct flights from the UK until February.

Asked about travel restrictions on the UK, Wells pointed to the ongoing lockdown, saying: “The United Kingdom is on lockdown even while they are deploying this vaccine to their citizens.”

He continued: “We are, as I said, monitoring the circumstance and we have our protocols at the border, and we’re hoping, as I said, [that] these protocols will be adequate to be able to slow down the progression of this new strain.”

The minister was referring to what he called the 10-day detection window for travelers entering The Bahamas, including the requirement to test negative for COVID within five days of arrival, the completion of a daily health survey during stay and the follow-up antigen test five days after arriving.

He said: “…So, that shortens the duration and the opportunity for someone to bring the virus in.”