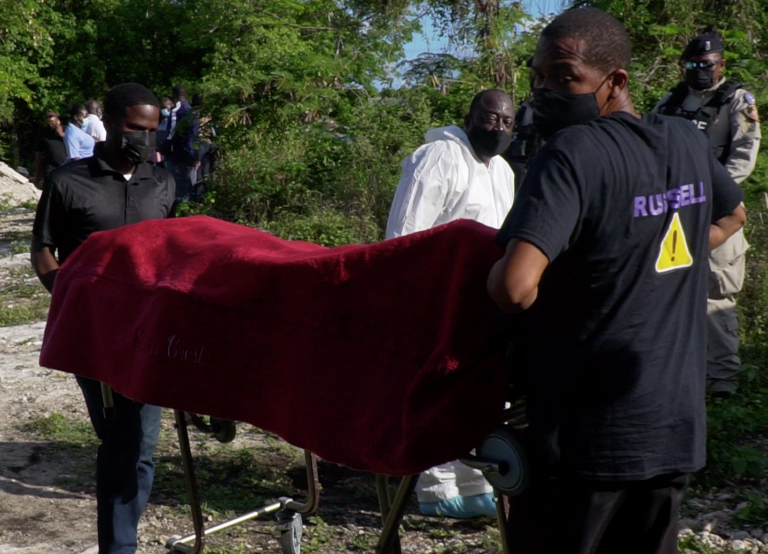 Mortuary services personnel remove the body of a man found on a vacant property in Fox Hill on Saturday, May 15, 2021. (FILE PHOTO)

Two shootings in under 24 hours; officials unclear if incidents connected

NASSAU, BAHAMAS — The body of a man believed to be in his mid-20s to early 30s was found on a vacant property off of Grant Street, Fox Hill, shortly after 7am on Saturday, according to police.

Police Press Liaison ASP Audley Peters noted that police received information from an individual who was walking through a track road and discovered the body.

Responding officers saw the body had gunshot wounds, and the victim was pronounced dead at the scene.

Peters said the body appeared to have been there “for some time”.

He appealed to members of the public who may have information on the matter to contact the police.

“We are asking persons who may be aware of individuals who are in possession of firearms to contact their stations as well,” he said.

“We have had significant successes in that area and for the past few days, we’ve taken a good number of firearms off the street based on police receiving information and based on police conducting searches of houses and properties.”

While he was unable to indicate a motive behind the killing, he sought to dispel rumors that the incident was a police-involved matter.

“We understand the pain and suffering of persons who may be experiencing loss at this time and want to find some way of rationalizing their pain,” he said.

“However, we can assure the public that this is not a police-involved shooting.”

Police also reported two separate shootings on Friday, one of which resulted in the death of a man believed to be 60 years old.

He said preliminary information revealed that a vehicle pulled up in front of a residence where several people were gathered, and two occupants exited brandishing firearms and fired shots into the crowd.

As a result, three men were injured and taken to hospital in a private vehicle.

One of them died at the medical facility.

The other incident took place outside a residence on Third Street, where a group was gathered.

Police said a dark vehicle pulled up in front of the residence and two armed masked men exited and shot in the direction of the group, hitting four people.

The injured individuals were taken to hospital in private vehicles and one later succumbed to injures.

Two of the victims are listed in stable condition and the fourth is in critical condition.

Peters said it is still early in the investigation so police cannot say whether the incidents are connected.

He also said no one is in custody in connection with the matters.