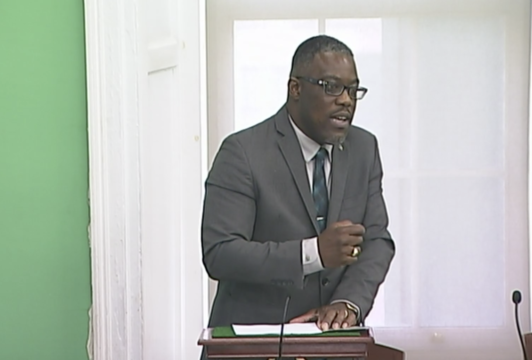 NASSAU, BAHAMAS — Acknowledging the hardship among the Bahamian people and the criticisms of the government, Tall Pines MP Don Saunders said yesterday that the Free National Movement (FNM), when walking in constituencies, “take our blows”, but insisted the general feedback from the electorate is more favorable than negative.

During the mid-year budget debate in Parliament, Saunders, the deputy speaker of the House of Assembly, said notwithstanding the unprecedented times following Hurricane Dorian and the ongoing pandemic, the government has demonstrated its unwavering commitment to the people.

“Mr Speaker, my team and I have never stepped away from the hard work and the commitment we have promised the people of Tall Pines,” he said.

“As we walk the streets these days, Mr Speaker, we take our blows.

“We take the criticisms, but we also accept the thank yous.

“We accept the moments when our citizenry and our constituents say: ‘Notwithstanding all the challenges, this government has stood up and is doing a good job.’

“And so, I want to thank this government for its hard work.

“I want to thank the prime minister for his hard work and his dedication.”

The government has maintained its unemployment assistance and food programs, as well as its microloans for small to medium-sized businesses, since the onset of the pandemic.

But thousands remain unemployed and the economy remains sluggish, placing a strain on Bahamian families and businesses.

Saunders said the FNM’s victory in 2017 “meant something important” and the events that have transpired since then demonstrate all in Parliament were “purposed to be here to fight for our constituents, fight for our country”.

Echoing the prime minister, Saunders said the focus of the government has been at all times on the Bahamian people.

He said if the focus strays from the people, and everyone does not work together, “we would not see the promised land after these challenges”.

“I wish to remind all of us in here and all [who] are listening today that unless we stick to that promise, unless we work together, we, as a people, we would not see the promised land after these challenges.

“I stand by them, Mr Speaker, to serve their people, to do their best, to help them through these challenging times because this government has already demonstrated a commitment to make our country better.