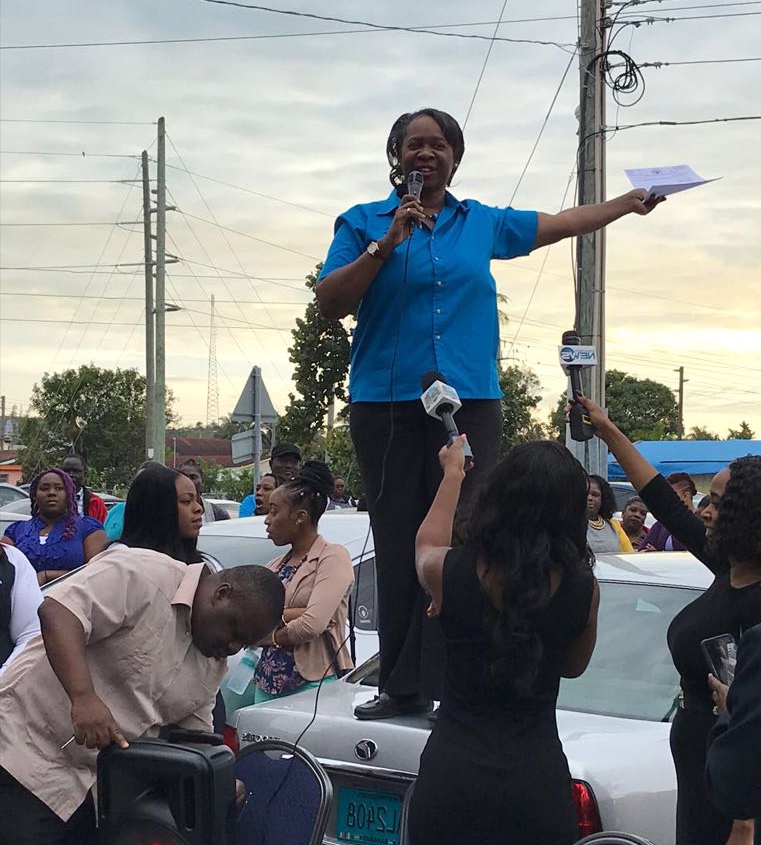 A mob of public school teachers rallied alongside union President Belinda Wilson outside the Bahamas Union Teacher’s (BUT) headquarters Wednesday morning, demanding respect for what the teachers say are their constitutional rights.

“We out number Y’all,” were the words Wilson shouted to over 200 teachers while standing atop the hood of a car.

She said the words she expressed was specifically aimed at school directors as she alleged teachers were being threatened by their school principal to not take part in union activities.

“You cannot run the school alone,” Wilson warned. “We are placing you on notice.”

She continued, “We have principals who are refusing to sign a National Insurance Board (NIB) form [for teachers] because of injuries on the job.”

A few weeks ago, Stephen Dillet teachers had a sit out after the school’s principal requested for teachers to remain off campus when having union meetings.

Wilson explained that there is a laundry list of concerns the union has with a number of schools, including salary deductions without reason from teachers’ pay, infrastructure issues that have caused concern for teachers and students in classrooms, and lastly, promotions.

Minister of Education Jeffrey Lloyd met with Wilson on Monday however, Wilson said while she doesn’t have an issue with the Minister, he didn’t have adequate resolutions to the unions concerns.

Last October, Lloyd admitted that there were funds being paid out to a number of teachers but he did not disclose how much the government owed.

Wilson said however, the figure is calculated to be in the millions.

The minister did not confirm or deny that figure.

Wilson told teachers Wednesday that she will be filing a trade dispute.

She said it is her first step in industrial action for reconciliation with the Ministry of Education. And if reconciliation cannot be met, Wilson said, the teachers will move to a strike vote.