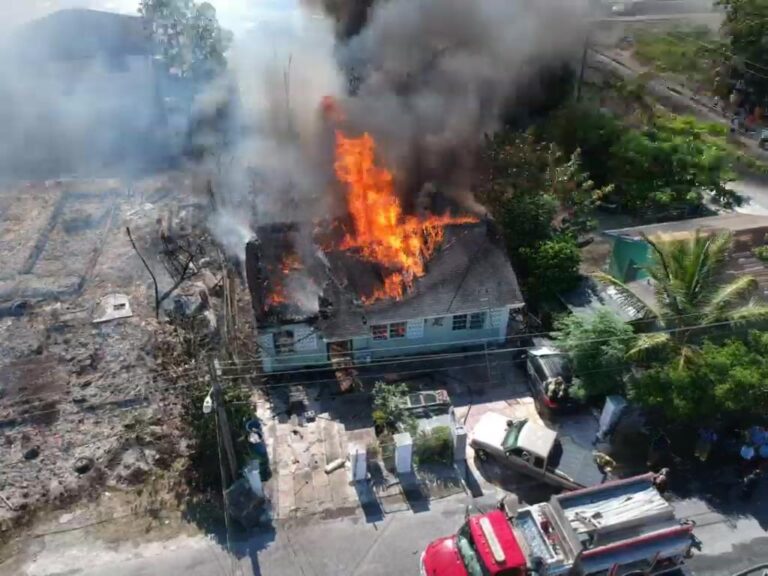 An aerial shot of a fire blazing through Jennie Street homes on Sunday, May 2, 2021. (FILE PHOTO)

Morris: The issue was water pressure from WSC

Morris said despite concerns expressed from residents that the fire services did not have enough water supply to respond to the blaze, there were a number of factors that contributed to the fire spreading.

On Sunday, police advised that shortly after 3pm the Fire Department responded to reports of a structural fire and met three structures engulfed in flames.

As firefighters and volunteers in the community fought to put out the fire, the flames spread across 10 structures, six of which were subsequently destroyed.

Firefighters were able to get control of the blaze shortly after 5pm, hours after several residents watched everything they own turn to ash.

Several residents said they believe their homes could have been saved if only there were better water resources for the fire services, indicating that while there were fire trucks on the scene, there wasn’t enough water to control the flames before it was too late.

However, responding to questions from the media, the police fire chief said three fire trucks carrying 1,000 gallons of water each responded to the catastrophe.

Morris said the first fire truck arrived on the scene within the first four minutes after receiving reports of the fire at 2.50pm.

“There’s no time that those trucks go to any scene without 1,000 gallons of water,” he said.

“…It would be impractical for us to go to a scene without water.”

Morris also sought to dispel rumors that the fire trucks were unable to access enough water from fire hydrants in the area.

He explained that the units were able to connect to a hydrant near the mall and were able to get water directly to the scene.

He noted, however, that the low water pressure could have been a challenge.

“The issue is Water and Sewerage. We asked them a number of times to turn up the pressure in the area, but they told us the pressure we were getting is all they could give. But water was never an issue,” Morris said.

“As soon as we reach the scene, we hooked up to that hydrant and we were getting water.

“Now, the pressure may have been the problem, but the pressure has nothing to do with the fire department; that’s all Water and Sewerage Corporation.”

Police have yet to determine the cause of the fire and investigations into the matter continue.

Residents in the tight-knight community told Eyewitness News that the fire started shortly after 2pm from what they believed were wooden pallets stacked up alongside each other on a vacant property.

The fire reportedly quickly spread to neighboring houses between both Jennie Street and Molly Street.